Returning to work, but not to normal

September. How did we get to September 2020 without having been away at all except in January? It seems inconceivable for us, given that last year we went to France and Poland within the space of a month and both prior to and after that we had other trips out of the country. But that's how it is in this oddest of odd years, isn't it?
And now it's time to go back to work as well, but not in the normal way of going to the university and giving classes to students I can interact with dynamically. Alas, we are still obliged to do most of our teaching online and I'll need to dust off my Zoom screen again. It's not that I really mind the online classes; I don't and I enjoyed the challenge of making them work for me and for the students too. However, it's a bit like working without an important tool or losing a dimension. Because I tend to walk around when I teach and use my arms to demonstrate, punctuate and elucidate my points (don't you love all those 'ates?), having to sit in front of a screen and not move feels a bit like teaching with only half of me employed.
Still that's how it has to be and I'd rather be doing it this way than not at all. I just hope that next year we'll be able to return to the real normal as opposed to the new normal.
Apart from that, the BIG news is that Koos has managed to get the new (old) engine in the Hennie H connected and running and it sounds fantastic. I am so proud of him for doing the whole job single handed without any professional help at all. Of course, we'd like a professional to come and check everything for us before we go anywhere, but that won't be until next year now anyway, so hopefully we can find an expert before then. We'll be doing heaps of testing first anyway, but we are just so pleased. It's as if the little barge has come alive again. 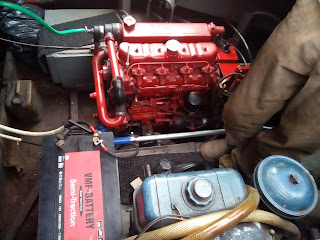 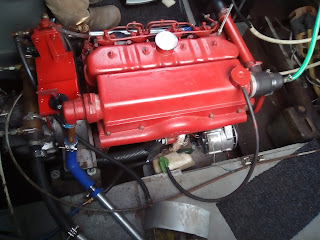 Maybe you'll remember we bought the engine just over a year ago and had fun with super tugs lifting the old one out and this one on board. We bought a garage crane to enable us to manoeuvre it onto a trailer and had big dramas when the old engine spilt oil all over the road (see post here). I still shudder to think of the hours we spent cleaning up our own Torey Canyon disaster. Then Koos built his own crane so he could lower the new engine into position once he'd made the mountings because we couldn't use our garage crane on board (see this post here). And then, of course, Covid came along to throw spanners into the work(s) and halt progress for much of the early part of the year. What a saga it's been, but what a reward to see it burst into life and sound so sweet.
As for me, I'm still scraping and painting (yep, condition normal). The roof on the Hennie H has taken me ages to sand down and it's now had two coats of primer. I just need a few more dry days for the undercoat to settle and I can finally put a top coat on. So keep everything crossed that this spectacular Indian summer lasts until next week. Meanwhile, I'll be off to the Vereeniging tomorrow to do more of the same there. You've got to love this life, haven't you?
Enjoy the rest of your week allemaal!
Posted by Vallypee at Thursday, September 17, 2020 15 comments:

Yes, you've guessed. We've been yo-yo'ing again although I'm having a bit of a job remembering the sequence of events now because in my mind, the Vereeniging and the Hennie H are beginning to get confused.

Which boat's bits have I been scraping when? And where did I leave that sander/steel brush/tin of paint? Murphy always accompanies me on these trips, of course, and if he has anything to do with it, the requisite tool/material will always be on the other boat.

Still some successes can be recorded:

2. So is Koos (although this is always debatable – sorry Koos).

3. Koos is halfway to finishing a dashboard box for the electrics on the Hennie H.

4. I have made a new side panel to replace one of the rotten ones on the Vereeniging – three to go out of the twelve I've been making over the last two years. Mind you, by the time I've finished, the first ones will need replacing again ... remember Murphy?

5. Koos has fitted a new expansion vessel to the Vereeniging's cooling system, which is much easier to fill than the old one.

6. I've now scraped all the paint from the trim at the top of the Hennie H's build up (I don't know what else you call the part above deck that forms the living space) and applied anti-rust primer to it. 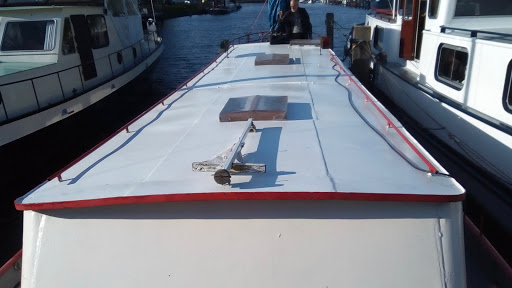 7. I've painted all the (new) panels on the port side of the Vereeniging.
On the failure side, the undercoat I used on the Vereeniging's stern has proved to be pro rather than anti rust. In other words, it's completely useless and after a couple of rain showers, rust patches are showing through it already, so guess who'll be sanding all that off again and using a different brand? Grateful thanks to anyone who can give me the name of the BEST anti-rust primer available. And I mean the best.
And another dampener is that as soon as I'd finished painting the panels, a cloud of dust blew off the quay and onto my fresh paint....insert expletives. 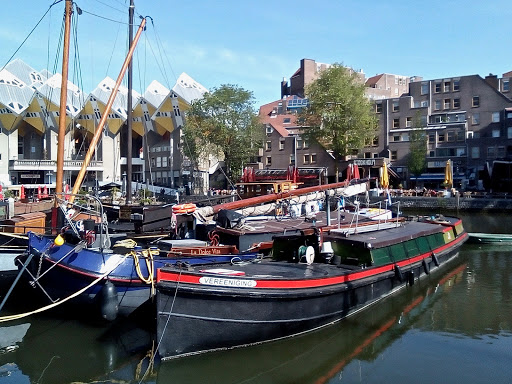 And lastly, while I was painting said panels, I spotted a patch of rust on the Vereeniging's waterline. Now, bearing in mind we spent two weeks out of the water in May and applied several layers of bottom coat to the water line, as well using a special primer that we were assured would be a good base for the blacking, this was a nasty shock and a disappointment. And it's not as if we use cheap coatings. This stuff is seriously expensive. Before the autumn sets in, I'm going to have to repair that, but I'd love to know why I cannot get this right. I wonder if it's because the Vereeniging is iron and not steel? Any suggestions will be most welcome.

Has there been anything else? Not that I can think of. We haven't actually seen anyone other than our always colourful neighbours in Rotterdam. One day, I'll write about them, but I think I'll have to move continents first. No, not really. They're all great, but being 'normal' isn't in their genes, which is what makes them colourful in the first place.

But that's not for today, as right now I'm about to hit the hay. Enjoy the rest of your week allemaal.