End of the year

This last week has been crazy. The end of the academic year always seems to be chaotic with everyone panicking that nothing is really ready for September when it all starts again. It never is and it never will be, so I don't know why they panic...just part of the routine, I suppose.

I don't know if I've mentioned it before, but since last September, I have been teaching two mornings a week at the Rotterdam Business School, which is itself part of the Hogeschool Rotterdam, a sort of university college. RBS, as it's otherwise known, is where International students  are generally enrolled, and 90 percent of these tend to be Chinese. RBS has a reciprocal arrangement with Shanghai University to take students who have done some studying there and give them a European academic education and degree. This kind of programme is driven a little too much by commercial interests for my liking, but I enjoy being there very much because of the students - they are just great and I really like them immensely.

Working with students from such a different culture, language and educational background is also a huge challenge, and I find it endlessly stimulating. It rather puts the teaching of English to European students in the shade as far as the variety, creativity and new approaches that are needed are concerned. Anyhow, once the exams for the year were over and the students had graduated to the next stage, the scramble to look at the new curricula, timetables and division of classes took over and that was much less fun.

There was, however, one very delightful interlude in the midst of all this. I decided to take a group of my students out for a kind of farewell treat, so I arranged with them that we would meet in the harbour and then go across the river to the Hotel New York. This is a famous and rather ornate building where the great America Line ships used to moor up and where throngs of hopefuls would embark on their way to a new life in the US. There we had coffee and pastries and I gave them all a small gift. Then we took the water taxi back over the river and had a nice walk around our harbour where I showed them the Vereeniging and all the other ships lying there.


It was a happy day. The sun shone warmly for us and my lovely students were all charm and smiles. What a sweet group they have been and what a pleasure to teach. It makes all the administration hassle worth it to know I have somehow been a small part of the academic machine that is helping them on their way.
Posted by Vallypee at Saturday, July 21, 2012 9 comments:

One Dog and his Man

Over the past forty eight hours I've been getting closely acquainted with a certain labrador by the name of Oberon. He's a canny soul, slightly posh,  remarkably well-versed and with a healthy contempt for the gullibility of his Lord and Master as regards his ability (the Lord and Master's that is) to resist or avert Oberon's attempts to get his own way.

To explain, Oberon is the narrator and 'I' character in the book titled One Dog and his Man by Mike Henley. This is a charming and very humorous view of the world from Oberon's perspective, hence the title. As anyone who has owned a labrador knows, they are obsessed with two things - food and comfort. Oberon is no exception and his accounts of how he manipulates his master into making both these things easily available to him are so familiar, I have been chuckling my way from page to page.  He has his master taped to a capital 'T' and provides a very useful guide to up and coming young hopefuls on how to sabotage their humans' intentions, kitchens and even love life with exceptional canine cunning.

It's not a long book. Interestingly, there are no page numbers, but the Lulu.com blurb says it's 109 pages including the title page, copyright page and extras. It's also beautifully illustrated by the late, Larry, who was a well-known British cartoonist, so given the amount of space pictures take up, it is a book you will romp through with ease over a weekend, or if you are a quick reader, even an evening. By the way, the drawings are a treat in themselves and would make me want to own the book just to look at them now and then.

Mike Henley is actually an actor and voice artist, but he clearly has some talent with the pen as well. I knew Mike at college long long ago (in those days, we both had long hair!), and had not seen or been in touch with him until we both re-emerged on Facebook and became contacts through the agency of mutual friends. I still have not met him again in 'real life', but even at college, he was known as a 'bright spark'. I see from his FB repartee that his wit has only increased with the years, and this is evident in his writing as well.

I hope this is not the only book he is planning to write as it would be good to read the feline side of the story too. I believe he has a cat called Nigel. That aside,  I can recommend getting hold of a copy of this one, especially if you have a dog, and more particularly, a labrador. You could learn a few things, and not only about dogs, while being very entertained in the process.
Posted by Vallypee at Monday, July 16, 2012 4 comments:

Roll up, roll up, it's the Magical Mystery Tour! 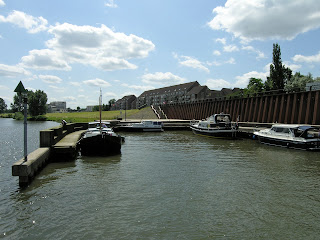 Last weekend, it was a certain person's birthday - as if all his FB followers hadn't sussed that one out! So, I thought that while we were on the subject of Beatles' songs, he who is now 64 should be taken on a Magical Mystery Tour. Hence it was that last Friday morning, I presented said gentleman with three envelopes, each of which contained a destination: one in the north, one in the east and one in the south. Koos, as indeed that's who it was, chose to go east, so I quickly arranged everything necessary to make sure the mystery was crowned in comfort, and off we set on Saturday morning - to the east. The first stop was at Cuijk, where, being drawn irrevocably to all things watery, we wandered along the banks of the mighty Maas in the sunshine. 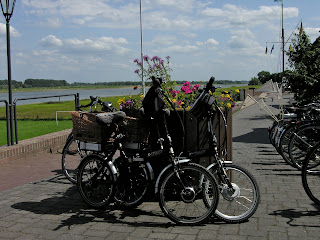 Next stop (again, typically for us) was Grieth on the banks of the redoubtable Rhine. The day was just perfect, but as always, the current on the Rhine was strong and we watched the ferry that takes cyclists and tractors (well that's what it looked like) fight its way across the river, bouncing around apparently without control, but always making it to exactly the right spot. Drunk with coffee and sunshine (see? So innocent we are), we headed back to our destination for the night in the charming town of Goch. 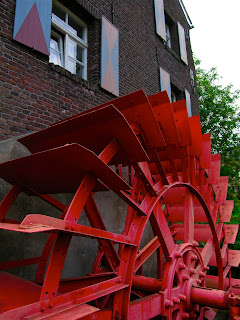 As I said, it's charming, and I was particularly taken by this lovely water mill as well as one of the most gorgeous houses I have seen in a while. I gazed wistfully over the fence and thought how very happy the owners must be. It is on the banks of the river Niers and everything looks tended with both love and a feel for atmosphere, grace and comfortable informality. 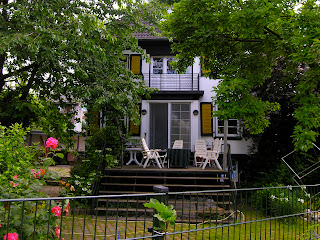 In the evening we walked round the fair which was going on in town before having dinner at a very nice local restaurant. Koos's photos of the fair attractions have already received their due attention on Facebook. It was a lovely evening and we finished it with a glass of wine on the roof garden of the small hotel where we stayed. 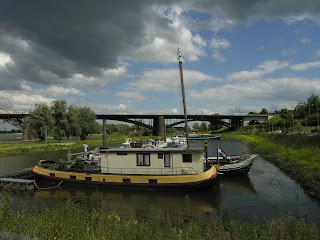 Sunday meant we had to start back home, but not before we stopped at yet another beautiful waterside. This photo was taken in Nijmegen It looks like the perfect place to moor, that is until you see the high water poles. Then you realise it might get a bit hectic in times of heavy rain. Still, it was a lovely end to a lovely excursion, and judging by Koos's beaming smile, it was worth the mystery!
Posted by Vallypee at Sunday, July 08, 2012 6 comments:

Dear blog friends. I don't know how to contact everyone here personally, and in fact I didn't want to put anyone on the spot either, so I am making this request to all of you who have read Watery Ways in the past.

My publisher would very much  like some brief quotes to use on the book cover, and maybe inside too, about readers' impressions of Watery Ways. Many of you said some lovely things to me personally in my last post, and they warmed the cockles of my soul, they did, but (and here is the request) could you...would you...write a sentence or two that would be suitable for such a quotation, e.g. "Watery Ways is....." and put whatever you like. After this, I would need the name that you would want to be referred to in print, and your 'job description', e.g writer, teacher, poet..and maybe the name of your book, record or other if you have published something too.

If you write what you would like to say in a comment, I will take that as permission to use it :) but please don't feel obliged! You can just leave a comment in the normal way and that will be absolutely lovely too. After all, I don't know how many she actually wants, so there really is no pressure at all.