A trek to the wilds of Welsh Wales 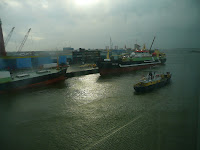 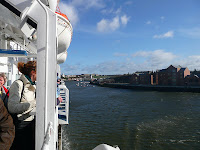 Last weekend was a discovery in more ways than one. I left Holland with Mo on Thursday evening on a ferry bound for England. We travelled overnight in stormy seas; they were rough, rolling and very uncomfortable. Still, I managed the trip without hurling anything, thanks to the power of some small white pills that kept my stomach stable but my head somewhat spaced out! I did it though, which I have never succeeded in doing before, and the fact that I could was the first discovery.

The second was a rediscovery of how beautiful England is. Having arrived and docked, Mo and I separated: she for the north and Scotland and me for the south west and Wales. I'd hired a small car, and in the brightness of a clear, sunny morning, I drove down across Yorkshire, across the magnificent Pennines to Manchester, and then south through the almost painfully lovely Shropshire to the ancient town of Ludlow. The weather stayed unusually fine, soft and warmly sunny the whole way and I realised I'd forgotten how rolling and green the hills of England can be, and how stunning is the light that falls on their crests with the shadows in the valleys throwing all into glorious relief. 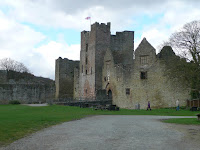 The third was another rediscovery, and that was of the great friendship that still exists between me and my old college friend, Ali. We were very close as students and shared a flat with our respective boyfriends. We were both always in trouble for getting up to nonsense which annoyed said boyfriends immensely, but we were always in it together and had endless laughter as our reward. This was the first time we'd met in nearly thirty years, and it was as if the gap had never been. It was just a marvellous weekend. 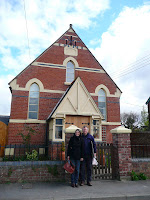 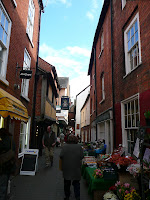 What made it even better was that Ali and her husband Jon took me for a drive across the border and into Wales, a land that I have loved since I was a child when we went there every year for our holidays. It is every bit as wild and dramatic as I remember, and we stopped to visit the most ancient church I have been to in a long time, and one that is in process of sliding down its mountain. We also climbed to the summit of one of the Black Mountains from which the view over the Wye Valley is breathtaking.

The last discovery was not so palatable, and that was that England seems to be in the process of being 'brought under control'. Well, that's how I perceive it. I have never heard so many ads on the radio concerning 'desirable' public behaviour as I did on this visit. Ads about watching neighbours for suspicious behaviour, ads about following socially correct behaviour, ads about adopting green behaviour - all issued in honeyed tones to make the listener believe this is all normal and quite natural. I found it rather disconcerting as a development.

Nevertheless, it was a fabulous trip, and the thirty six hours or so that I spent with Ali and Jon in their picturesque country village with its cast of characters that could have been from an Agatha Christie novel or a Midsummer Murders episode was free of any contact with TV, Internet or radio and as such it was bliss!

Thank you Ali and Jon and I promise it won't be another thirty years before I see you again..if it is, we might be on another plane altogether....

Anyone interested in watching a slideshow of all my photos of the trip can click here
Posted by Vallypee at Tuesday, March 31, 2009 9 comments: 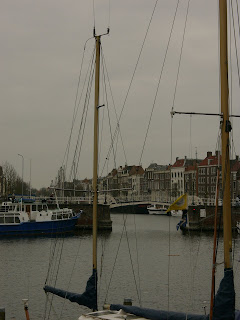 Yesterday was cold, blustery and almost unrelievedly grey. More of a day for staying inside tucked up with a good book than for exploring. Even so, we did. Explore that is. We decided to go and investigate Middelburg, the provincial capital of Zeeland and a neighbouring village Arnemuiden (pronounced Arnemouden). The motivation was an application I have made to the university in Middelburg to do some freelancing there. So far, they have nothing available but are 'keeping your (my) CV on file". In my business, that is encouraging as there rarely is work immediately, but when courses come up and they don't have enough teachers to cater to all the students, they call on their pools of freelance trainers. Hopefully, one of those will be me.

I say hopefully, because Middelburg is lovely. A gem of an old Dutch town with grace and character. Even better, it has a thriving harbour network, so were I to find enough work to move, then the Vereeniging might well find a place there. Of course it is a lot closer to the little house too, and that is always a bonus. I don't think I'd want to make the drive every day, so to have my barge there would be an added bonus, but hey, I'm just dreaming now. 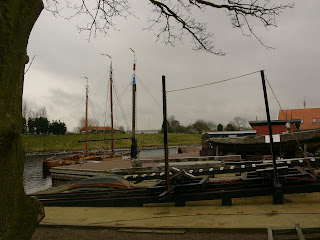 The visit to Arnemuiden was less inspiring. It is a typical Dutch village, but of the rather severely Protestant variety as is suggested immediately on arrival by a welcome board, saying 'Welkom in Arnemuiden namens de kerken" (on behalf of the churches!). Maybe I should add here that in some places in the Netherlands, there is quite a noticeable religious influence in the way people live their lives, and when I say Protestant, that implies the very strict and somewhat austere Calvinism that was prevalent in the country in the 17th and 18th centuries. This style of religious observance is still part of the fabric of many Dutch villages and towns, as opposed to the Catholic areas, which are known for their more relaxed and vivid lifestyle.

The best part about Arnemuiden was the old shipyard where they appear to restore historic boats (always interesting for us). The most amusing part about it, though, was that it seemed to be incredibly difficult to get out of the village...the line "you can check out any time you like...but you can never leave".....came strongly to mind, and bordered almost on hysterical when coupled with "namens de kerken"!
Posted by Vallypee at Sunday, March 15, 2009 17 comments:

The stuff of rivers

I was walking along the river the other day...as I do..and realised there are all these things that I pass every time I take this route. Things that are part of the colour and stuff of a big river, but that I don't normally give much attention to.

I love the river. It is ever changing, always moody and magnificent. Huge liners make their way here from far reaches of the earth, but also the much smaller Rhine cruisers that travel to Basel with ship loads of pampered passengers. I would like to to that one of these days, and often stop to look at this notice by the jetty where they moor up.

The jetties have to be very securely fixed to the river bank, as when the tides are high and the currents are running strong, the waters could sweep them easily away. Hence this massive chain that holds them in place against the force of a flooding tide. 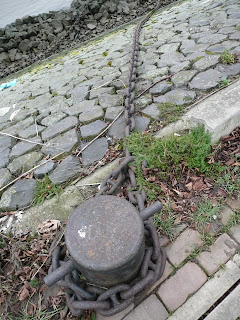 A little further along is a smaller jetty where the water taxis stop to expel and scoop up passengers. Darting about the river like demented dragonflies, they add to the vitality of our urban waterscape, and these yellow 'bus stops' are a feature of many of the harbours here too. 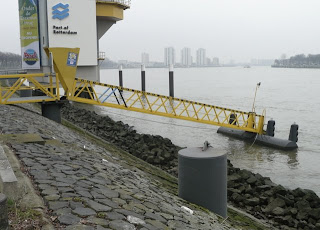 Then there is our very own traffic control tower. I always used to think there were people manning it and envied them their marvellous view across the full extent of Rotterdam's skyline. Then I found out that no one 'lives' up there. What a shame, hey? Although having said that, it's quite a relief as I also used to imagine them wondering about the dotty woman with her loopy dog who periodically goes on a cleaning splurge along the river side and picks up the heaps of litter that other wanderers throw down! 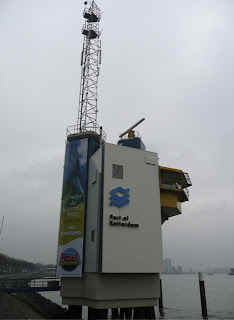 The last place to capture on my February morning walk was a different view of our own Oude Haven. I like this angle here from between the trees, and it reminds me of what the harbour is all about with its old engines standing on show. Sometimes in the cut and thrust of daily life and making a living, it's good to see all our old barges in context. Kind of puts things in perspective again. 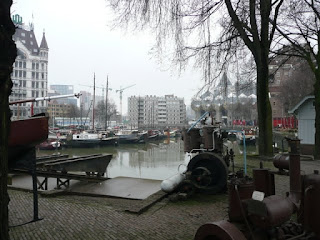