I wonder how this will work. My first attempt at a trailer for promoting my book.
Posted by Vallypee at Wednesday, March 27, 2013 13 comments:

The Vereeniging will return 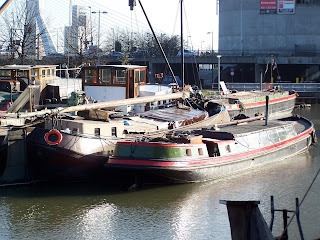 Well, one thing is clear. She wants to live on a barge. She loves it despite the inevitable inconvenience that such a life brings. The second thing is that she realises it cannot be the Vereeniging. My little barge is too small for my daughter's myriad interests. She is bursting out of it at the seams. I saw this coming almost from the first and I am not surprised. Her books, musical instruments and art work alone take up more than all the room there is. What there is left to live and cook in is less than her ambitions in this department will allow. I know she was worried about telling me, but it was clear to me in many ways. I am only glad she's had the experience and decided what she wants.

The other and good part is that I get my barge back. And in truth I'll be very happy to receive it again. I've missed it dearly, and I'm already dreaming about what I'm going to do with it in the coming years. One thing I've learnt is that the Vereeniging is too much part of me to relinquish, and come what may, my barge and I will be cruising off into a French sunset one of these days.

The Smell of the Water

It felt like spring today. Did anyone else notice that? The air was soft and I could smell the water. It's like the call of the wild to me. I want to be casting off the ropes and getting out onto the waterways. Job? Commitments? Paying the taxman, medical insurance, community charges? What I would give to thumb my nose at them all and take off.


I am reminded of a fantastic trip we did back in 2004. It was just a day like today although slightly later in the year at the beginning of May. But it was a very special day. We took the Vereeniging upstream towards Gouda, turned left into the Rotterdam Ringvaart and went where no old barge had been in a very very long time. The waterways are very, very narrow, the bridges are extremely low and the canals very shallow. Even for the Vereeniging, it was a challenge. We quite literally scraped the bottom of the waterway over an aqueduct, and then we had to remove everything off the hatchboards to get ourselves under one particularly low bridge. It was an action packed adventure and a half all conducted at the pace of a snail. It was just one day but it felt like a complete and timeless holiday.

That trip was even more special, though, because my guide and mentor for the day was a very dear friend who is no longer with us. His name was Jan and he coached me in the art of steering my barge. I remember it as the one of the rare days in all the time I knew him when he looked fit, healthy, handsome and happy. I am so glad the Veeeniging gave him that day. I treasure it still. 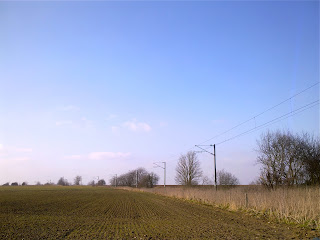 Two weeks ago now, we went to France for the day. Cambrai to be specific. It was beautiful weather but very cold, so we didn't enjoy it quite as much as we normally do. There was another reason for that, though. What we didn't realise as we were taking in the beauties of this particularly remote area of northern France was that Koos (he with the real photographic talent for those who don't know him) was busy building himself up for a week in hospital. He might have told me (I complained to him later) but Koos being Koos simply muttered about being cold (very rare for him), turned down the chance of a luscious creamy dessert when we had lunch (almost unheard of and cause for concern in itself) and asked me to drive home (something he hardly ever never does when we are in France). Actually, now I come to think of it, he asked me to do most of the driving there too (I should definitely have been warned then). 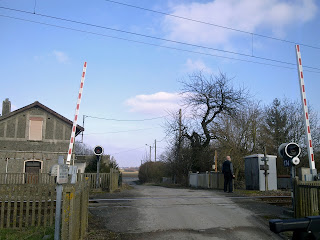 On the way there, though, we'd stopped by this remote, but still used railway line - although the station is out of use (spot the Koos in the photo before while he got cold). It was so quiet, so tucked away, so far from not just the madding but any crowds at all that we both felt that kind of hush that creeps over everything and makes you want to whisper. In fact, the lane I was standing on where I took this photo was cobbled. Only the part around the railway tracks had been tarred. It made us feel as if we'd stepped back in time, or at least into a parallel world. 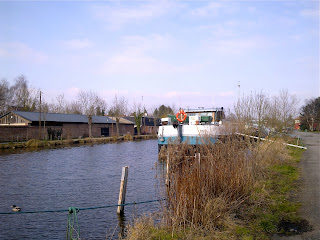 When we reached Cambrai after a few more detours, we found lunch in a great restaurant with the wonderfully cross cultural name of 'Le Jolly Sailor'. It is run by an Englishman with his 'vairy Franche friend' and they do a brisk trade in excellent food which combines well with the impromptu 'vaudeville' style songs that John (not sure if that's his real name), the Englishman performs, accompanying himself on the piano. The lunch weighed heavy on our tums and so called for a walk along the canal before we decided the cold was too cold and headed on home. Koos slept much of the way back (not all so surprising as he often does) but by the time we got home, he seemed better and we spent a normal evening together. By four o'clock the next morning, though, things had changed again and this time, we were calling an ambulance. Just as well it seems. To cut a long story short, Koos is home again now with some extra bits of tube keeping the blood circulating through his heart.  It's an op he's had before, so we knew the signs, but I'm very glad it's over. I can now look back on the 'before' and know now for sure that it's 'after' - and that it's alright.

Get the violins out

Owing to one thing and another, I have not had much in the way of me time of late. As I've mentioned earlier, this is a busy time of year anyway, so it's normal. But, the thing is, and it's become quite a thing for me, it has interrupted something that I have grown to love doing (although everyone else around me is probably much relieved): my violin practice.

Up until the last couple of weeks, I was managing. I could practise three of four times at the weekends and once or twice during the week, but now I haven't touched it for fourteen whole days and I've really missed it. So to console myself, I have  started planning how to upgrade my little student violin. I've been looking at new strings especially for fiddle playing, and I've also been lusting over carbon bows. Can you imagine the excitement? You think I'm joking, don't you...

Maybe I'll give myself a treat and order them. It will give me the push I need to get back into it again now the period of hectic activity is drawing to a close. Not to mention the fact that with the cost of the bow alone, I'd better make sure I make use of it.

I wonder what the neighbours will think about the resumption of the cat's chorus. They'll probably take to turning up their TV's again. It's either that or they'll be wondering whose animal is in season!

Are any of you trying to learn an instrument, or do you remember the feeling of worrying about what the neighbours might think of your early efforts to become your own Yehudi Menuhin?

And for my next post, I hope I'll have some good news about my new (getting old now) book....it's about time I finished it (two years down the line), so the fact that it's nearing the end is quite a triumph in itself. Another reason to treat myself...
Posted by Vallypee at Saturday, March 09, 2013 12 comments: What it really means, I don't know, but I've just learnt that The Skipper's Child (see below right in the sidebar) is one of the books that has reached the voting stage of The People's Prize. Just the idea that people can vote for my book, or that it has reached such a stage and page seems mind boggling to me. I'm really thrilled about it. Even if it doesn't go anywhere and gets zero votes, just being there seems amazing. Needless to say I am squandering all the goodwill I have from my friends on Facebook, Twitter and everywhere else (yes, even here), who will probably get sick of me plugging it for the next couple of weeks. I'll make it up to you all soon, I promise! Once I've got over this busy hump and re-charged my failing batteries, I'll be visiting blogs, tweeting and chatting again, but for now and as long as I can keep my eyes open, I'll bask in the pleasure of seeing my book on The People's Book Prize: