It could only happen in Holland, couldn't it? There I was, taking Sin for her first constitutional of the day, when my morning blur was interrupted (if not invaded and assaulted) by an incredible sight. There, against the quay of a familiar harbour, lay a fully fledged medieval castle. Not built deep in granite, as one normally expects to see, but erected on an apparently stone hull, and rocking with the current on the incoming tide.

Sindy and I stopped to inspect this marvel which had literally risen up (or floated in) overnight, and sure enough, our eyes were not deceived. We were not in phase two of our sleep cycle, and we were definitely not dreaming. A castle it was, complete with ramparts and fully armoured soldiers keeping watch. On closer inspection, it proclaimed itself. It is named the Vlotburg, and is apparently a floating museum. So far I have no idea what its purpose is, although I mean to find out; nor do I know what it is doing in a normally quiet harbour out of the usual tourist circuit, but no doubt all will soon be revealed. If so, and as and when, I shall keep you posted! 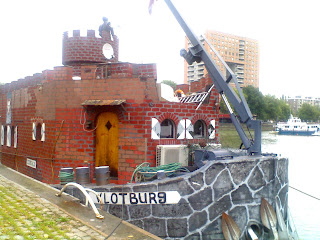 The Vlotburg from its bows 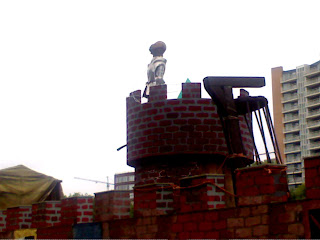 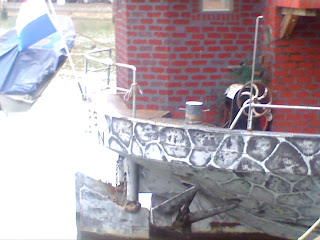 A close up of the 'stone' rudder

Once again, photos courtesy of my phone, so apologies for the poor quality, but as I said before, this could surely only happen in the Netherlands!
Posted by Vallypee at Wednesday, September 24, 2008 13 comments:

Saturday was the day. After two months of wrestling with mechanical problems on our new bargelet, the Hennie H, Koos finally decided that it was now or never, and quite impulsively for such a trip, we set off on a cool and cloudy Saturday afternoon. It was much colder on the water than I expected, and although I really enjoyed the faring, it would have been difficult to tell from the shivering blob sitting on the back deck next to Koos. We made good time, though and by 6.30 we were at the entrance to my watery nemesis - the Hollandsch Diep. It was a toss up whether to keep going and head across to the Volkerak Sluis (lock), or play it safe and stop at Strijen Sas. Given that we had no lights, and couldn't be sure of making it across before sundown, the latter won. Not that I was sorry, because we had time for a long walk in peaceful country and something to eat at the local 'eet café' before settling down for the night. At the lock, that would have been it - just the lock.

Sunday morning dawned crystal clear and bright with the sparkling water and bright sunshine. The Diep didn't get me this time, and neither did the Volkerak (another Diep). It was truly beautiful as we passed through the Rijn Schelde canal and then into the lock before the Oosterschelde (a monster Diep). This lock was quite a small one and we were the only ones in it. It only had a few inches to go up or down, but we waited...and waited...then the foot tapping started. Twenty minutes later, an apologetic lock keeper appeared to tell us the door wouldn't open, and would we mind waiting half an hour? We smiled - not much choice really! Still, it gave Koos a chance to set his mind at rest about his mechanical nightmares, and indeed, half an hour later we made our way out of the lock into - the Sea...eeek!

The Oosterchelde was very choppy with strong winds, white caps and lots of waves. It was also very beautiful but hard for me to appreciate given that I was clenching my teeth to keep my stomach from making a grand and messy exit. An hour and some later, both my innards and I were relieved to enter the South Beverland canal and still waters again. We'd made amazingly good time, and by 4.30, we'd reached the big locks at Hansweert, and the entrance to the notoriously busy and sealike estuary, the Westerschelde, where I elected to leave Koos. Two reasons. I had to be sure of getting back to Rotterdam for work today, and secondly, I didn't really want my stomach to have a second attempt at parting company with me. The last picture here was taken at the top of the lock, up which I'd climbed to get off the boat. I was a little worried about leaving Koos as the traffic on the WS is also notoriously large and plentiful. As I watched him leaving, I saw a sea ship the size of a whole town passing the entrance to the canal. Gulp! The Hennie H is so small. Would they even see it?

An hour an a half and an 8km walk later, as I was waiting for the train to take me back to Rotterdam, the phone rang, and it was Koos. I could hear something was up. "I've arrived in Terneuzen," he said "Wow!! That's fantastic. Well done!!" I shouted with relief. "Yes, well that was the good news. The bad news is that as I left the Westerschelde to turn into Terneuzen, the rudder got stuck and wouldn't turn anymore."

I'm not sure at all that was bad news now. It's terrible that there is yet another problem with the Hennie H, but I think the angels were watching over Koos yesterday. If the steering had got stuck when he was still on the open waters...well, it just doesn't bear thinking of, does it?

Luckily, with the help of the Terneuzen lock keeper, and a kindly commercial skipper, the Hennie H was towed the remaining 15 odd kilometres, and is now at its official mooring in Sas van Gent. On to phase 2 of its restoration. Ah well, at least it's finally where we want it! 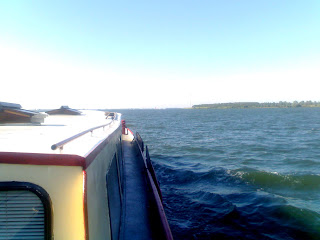 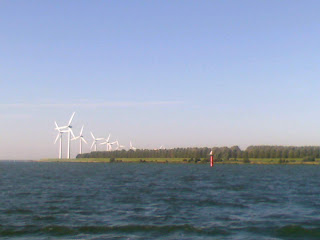 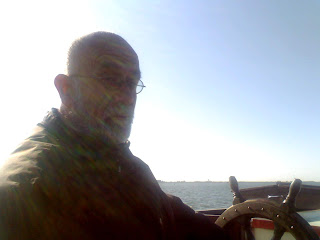 Not a very good one of you know who 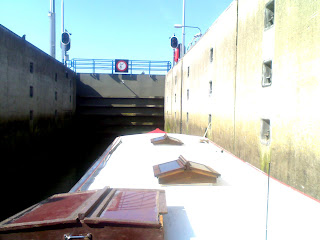 The Lock where we got stuck 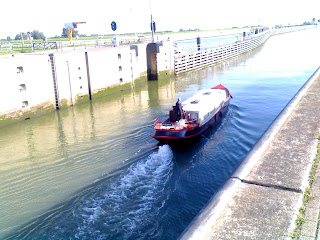 Koos leaving to cross the Westerschelde. Apparently it was calmer than the Oosterschelde, so I'd probably have been ok!

PS: Apologies for the poor quality of the photos. All are from my phone. In our rush to leave, I forgot two important items: My book and my camera!
Posted by Vallypee at Monday, September 15, 2008 11 comments: 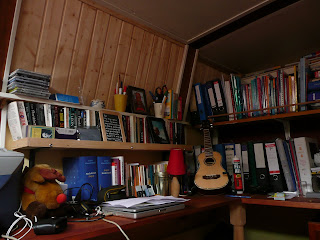 My 'office' - just ignore the usual clutter and look at the new panelling - sans paint still, but nothing's finished yet! 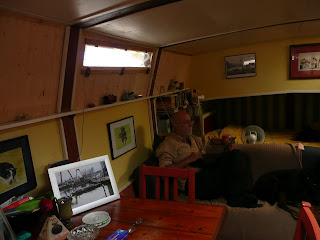 Still a window frame to make, and yes, that is Koos and Sindy in their favourite spots! Sorry about the fuzzy bits. Must have had a wobbly hand with this one! 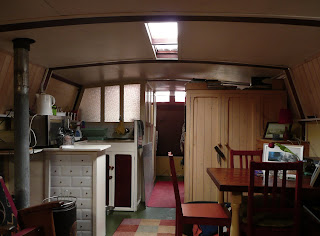 And from the other direction

Overall, I've lost about 15 centimetres width due to the amount of insulation I've put between the panelling and the steel, but it doesn't feel too different. There is a sense of reduced 'volume' though. You can see the difference if you look at the section in the kitchen which still has its old panel sitting there. There's going to be a window in that one place, so no steel and no new panelling there yet, so that is still at the old width.
Posted by Vallypee at Sunday, September 07, 2008 19 comments: