The beauty of the Thames at the barrier

On Friday I went to London to visit my brother and my sister. As I flew in very early (the price you pay for cheaper flights is being dragged out of bed at uncivilised hours), I had some time to spare. Landing at London City Airport also meant that I was close to the Thames Barrier, which I'd never seen before, as well as to Docklands, a region of the city I remembered from my childhood but had never re-visited.

At 7.30 in the morning, I was the only mad soul wandering next to the Thames. It was a grey day, but even so, at low tide, the river was extraordinarily lovely. It has an untamed quality that our Maas here doesn't have, and I love the mud flats and the waders. Below are just a few of the photos I took that morning. The Barrier itself is strange but also rather beautiful in this soft water colour light. 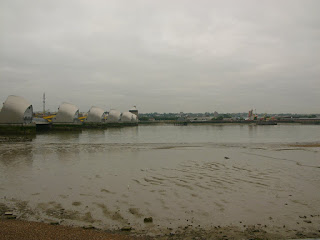 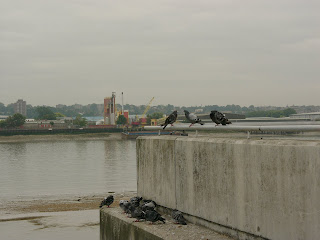 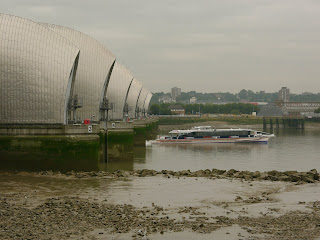 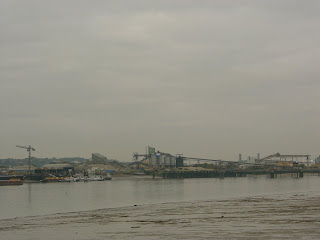 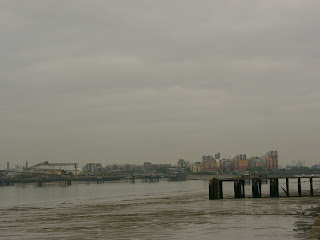 We're back in Rotterdam now, and it's back to work tomorrow. Lots to do on the home front as well with Maryssa arriving next week, but I'll keep you posted on that front too. xx

Here are more of my pics if you'd like to see them. They are totally unedited so no lines or horizons straightened. Sorry.
Posted by Vallypee at Sunday, August 31, 2008 14 comments:

Buried in the Bundu

This past week has been so restful. Koos and I have been at the little house in Westdorpe, and to be honest I have no clear idea what we've been doing apart from sleeping, painting windows and doors, walking and (for me) writing. Nothing has been particularly rushed, and we haven't been very far either. To Ghent a couple of times, once to a second hand furniture shop, and the second time to follow the waterway through Ghent as part of the research I needed for my writing. On both occasions it rained as it has been doing for most of this month, but we didn't mind at all.

On Friday we went further afield on a memory lane trip to La Louviere, south of Brussels. For some reason this old mining town next to the canal with the famous ascenseurs (boat lifts) has a deep and lasting place in our affection. It rained again, but we didn't care, and walked along the peaceful, disused canal, loving every dripping moment. We also have a tradition of buying shoes there (go figure that one!), and returned to a favourite shop where the proprietor was expansively French, wreathed in smiles and bonhomie and smoking shamelessly in his shop. In fact, the no smoking bans in the rest of Europe seem to have escaped the Belgians as everyone seems to smoke everywhere..ironic considering most of the legislation comes out of Brussels.

On Saturday, we made further inroads into village life by going to the neighbourhood barbecue, which far from being the provincial village bash that one might expect, was great fun. The people from our dyke village were warmly welcoming and we soon got chatting to a small group of lively, interested and interesting people. Then there was good rock music and dancing, plenty of smooth red plonk and the end result was a great evening. When we left, everyone waved cheerful goodbyes and we felt thoroughly accepted.

Yesterday, we finished painting the front door and window frames of the house a rich and glossy dark green and cream, accompanied by cheerful commentary from our English neighbour, who claimed that watching us work was the most relaxation he'd had all week. 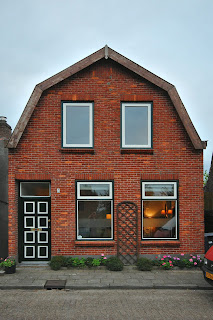 The front of the house as it looks now. Still the fascia board to do all round, but it looks so much brighter 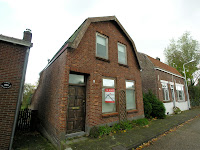 Extreme close-up of the front door. I love the colour combination now. It looks so much classier than the dismal brown it was before

We'll be here for the rest of this week. Tomorrow I'm going on a mission to Brussels in search of a bedroom cupboard for the house, having discovered that second hand furniture in Belgium is of a better quality and cheaper than it is in Holland. I'll also be winding myself back into work gear during the week as I have some big projects starting in September. However, on Friday, I'm off to London for the day to visit my brother who had a brain aneurysm a few weeks ago and is still rather unwell as a result. It was a shock to us all, as he has always been so fit. The doctors say it will take up to a year for him to be well again, so I'm hoping to take him so good cheer at the very least.

A Break at last

These past weeks have been crazy. Since my last post, I've been working against the clock to re-build the interior of my barge, much of which had to be dismantled for the new steel sides to be welded on.

The problem was that the green wooden panels formed my 'walls' before, both inner and outer, but with the new steel, I've had to add insulation and timber on the inside, and then put the old panels back on the outside of the steel. I know I should have taken photos, but I've just been too tired to even think of that. I wish I had though, as it all looks very nice now. I've used tongue and groove pine planking over 5cm thick insulation, which gives it a rather different look and feel inside. I have, however, kept the separators between the panels so it still feels quite familiar, and I still have the continuous line from the floor and up the walls and over the ceiling, which I've always liked.

On the exterior, it all looks exactly the same as my dear friend Alex kindly and nobly painted the green panels for me and Koos and I put them pack into place yesterday. The outside appearance is of course what is important as far as its historic image goes, so as long as that looks the same, no one is going to complain. For my part, though, the barge is now stronger, more weather proof and will be able to take the waves on the river without letting water in. As we say in the boating world "water outside boat:very good. Water inside:BAD!!"

We are down in Westdorpe now for a much needed break. While I was busy with my re-building project, Koos was hard at work on the Henny H. Sadly, there has been one problem after another with its engine and technical apparatus. Somewhat soul destroying for poor Koos - and Bruce, who has been helping him. Just as they thought they'd got the last thing fixed, something else has cropped up to cause further delays, so we decided to cut and run for at least the next week to ten days to give ourselves some respite.

Hoping you are all enjoying your summer/winter whichever side of the line you happen to live on. Love from us here in cloggieland.
Posted by Vallypee at Saturday, August 16, 2008 9 comments: