Thursday was the big engine exchange day for our Hennie H. I can honestly say it all went well, until the tow boat crew, whose crane we were using, lifted our old (and, to our horror, much heavier than we thought) engine off their deck at a steep angle and oil started pouring out of the head....
Well, after leaving a nice pool of it on the loading quay where we were doing the transfer, we got it on the trailer where it was also at an angle. Although slightly anxious, I was comforted to know we had several layers of tarpaulin beneath it, so I didn't worry unduly as we didn't have far to take it. Anyway, we believed there wasn't much oil left in it given the reason it had conked out in the first place was because all the oil (we presumed) had run out of the oil cooler. We should have known better...much better.
To cut a long story short, when we lifted the engine off the trailer to store it, the trailer tipped and the oil that had been steadily leaking during our short drive poured onto the road...yes...heart failure time...and there was a lot of it, so a quick brush over with cat litter and sand wasn't going to hack it.
Not only that, we discovered the engine (being so much heavier than we'd thought) had damaged the floor of the trailer too. Since it was being lent to us as a favour, the whole situation was assuming nightmare proportions.
Anyway, we spent hours on Thursday afternoon and evening cleaning up oil (cat litter, sand, detergent, the whole lot) and the whole day again on Friday (with a high pressure cleaner), all the time praying that no one from the council would come and catch us at it (think massive fine). The upside is that the pavement and road have never been so clean (thank you, high pressure cleaner) but we were both exhausted from all the anxiety and extra work.
Koos went to eat humble pie with the trailer owner who fortunately acknowledged its floor was already rotten, so they came to a mutually acceptable financial agreement. Koos is very good at charm offensives. I think I would have been so overcome with remorse I'd have ended up paying double.
I also think I'm getting too old for all this excitement.
Here are a few pics of the exchange process.

Well it seems summer is taking a break after quite a long period of hot dry weather. August has brought the rain, which is pretty inconvenient as this is the time we are trying to do some much needed boat maintenance.

Gluttons for punishment we are, I know, but we're trying to keep the Hennie H in good order while making arrangements to replace the engine. At the same time, I'm doing my best to smarten up the Vereeniging while Koos instals an alternator to make sure that when we do eventually go faring, we can charge our batteries without using the generator or shore power. Complicated? Yes, it is rather.

You may remember that back at the end of May we bought a second hand replacement engine for the Hennie H. I wrote about the crane we also bought for hoisting it here. I have to say we are more than pleased with this incredible piece of equipment. Considering what it means to us, it was cheap at €150. It has enabled us to lift and turn the engine round in our passage and also to shift it for removing parts. There is no way on earth we could move this beast of a block without it.

Unfortunately, we won't be able to use it for lifting the motor onto and into the engine compartment as there's no room for it on the back deck. So, that's the next hurdle. Meanwhile, Koos has disconnected everything from the old Hanomag, and that's now ready to haul out. I've been the one fetching scalpels spanners, forceps pliers and other necessary surgical instruments with which to prepare it for the transplant. I've also been scraping, sanding and painting those parts of the boat I've been able to attack between the showers.

Then there've been the mad dashes back to the Vereeniging to work on the paintwork there. The weekend before last, I managed to scrape and paint half the foredeck before it rained.

Then during the week, I kept my beady eye on the weather forecast and saw that on Thursday, it would be dry all day, so I booked a leave of absence from the Hennie H and hightailed it up to Rotterdam. After three hours of chipping old tar of the edges (a horrible job that always makes my face burn), and then a couple of hours sanding, I was ready to paint some more. I still haven't finished it, but this is what it looks like so far. The red blotches are where I've applied anti-rust treatment, which I couldn't paint over.

Now it looks set to rain for several days, but I'm hoping I can still get a bit more paint on...it's ironic that water is a boat's greatest enemy, isn't it?

One big bright spot in the last week's activities was a trip to Gent that we made last Tuesday to see boating friends we met in France in 2017. Jude and Roger have a cruiser with the brilliant name of 'Beats Working' and they're currently pottering around Belgium at a suitably leisurely pace. We met up with them at their mooring in the centre of my favourite city and shared lots of laughter and fun as well as my first baking attempt in months, a plum and apple tart. It all went down very well (the fun and the fruit). 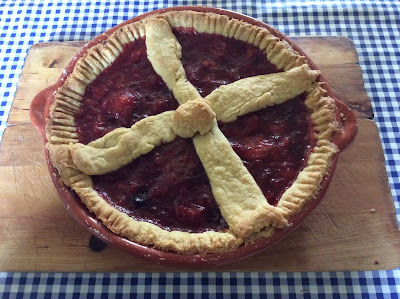 So that's the state of play this week allemaal.
Wishing you all a good week wherever you happen to be and I'll fill you in with our news and views again next week.

Great encounters of the friendship kind

One of the best things about this internet world in which we live is when we get to meet people we've been communicating with online for real. The last weeks of July gave Koos and me the chance to meet some very special people that we've 'known' for ages, but only via internet connections.

The first were Jill and Gary, fellow boaters that we know from various online barging groups. We've exchanged knowledge, jokes, comments and experiences in these groups for several years and almost met once when visiting other friends, Ann and Olly up in Groningen...well, we passed their barge on a spuddle in Wandering Snail, Ann and Olly's narrowboat. See here. 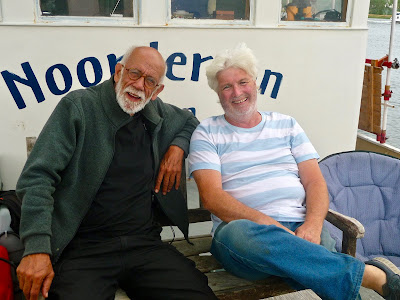 We kept missing each other while they were on their way across country (they were in Rotterdam when we weren't and vice versa). So, when Gary and Jill arrived in Sas van Gent about three weeks ago, we spent three lovely days meeting them, imbibing large quantities of coffee, walking their gorgeous dogs and generally catching up with our real lives rather than just what we'd shared online. They even took us for a trip up the canal on the Noorderzon, which was absolutely magic! Koos got to steer and Jill and I sat on the foredeck chatting. They are wonderful, inspiring people and nothing seems to daunt them. 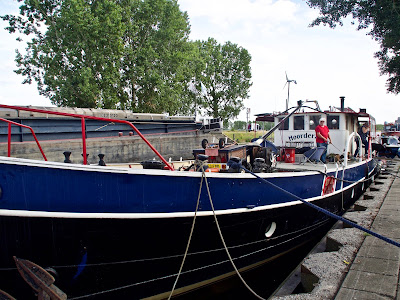 Their barge is a beautiful craft that was formerly used to deliver to and refill the gas in the big shipping buoys, so it was built with breadth and volume and seems positively palatial in terms of space compared to the Hennie H. It was a very special  meeting and we enjoyed it tremendously. As they're on their way back to the UK (and yes, crossing the channel), we don't know if or when we will meet again, so I'm so glad we could do this. Thank you both, Jill and Gary! 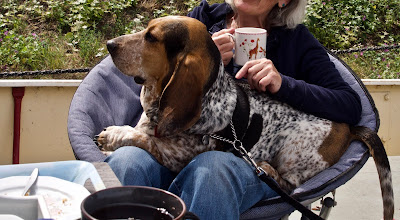 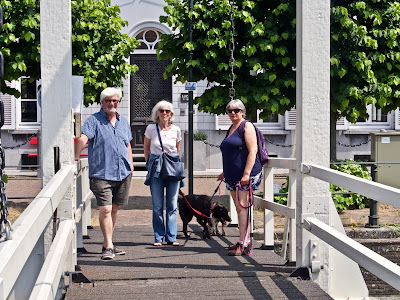 The other meeting followed shortly after when I met fellow writer, Stephanie, a former author with Sunpenny Publishing, the company that produced our earlier books. Again, I've missed previous opportunities to meet Steph so knowing she and her husband were coming to Amsterdam was a chance I couldn't let go. Sadly, Koos couldn't come too as it was when he was having his dizziness problems, so I took the train to Amsterdam and sought Steph and Alan out in their hotel.

They are truly delightful people and I had a really special time with them. It was only a few hours, but enough to confirm that Steph is exactly like her internet personality and we got on like a house on fire. She's a hugely talented and prolific writer stemming from Bandera in Texas. She now lives in Scotland, so her books are very international in background and have a great sense of place as well. I can recommend checking out her colourful and lively murder mysteries here.

Alan too is an author of some rollicking good time travel adventures and I've enjoyed those I've read very much. He particularly likes the historical research that he puts into his books so you know when you read them that he's really done his homework. His books are here

Of course we had to take the usual 'author meet-up pics', especially as we don't know if we'll ever have the opportunity to meet again. These are moments we'll all remember, so forgive the happy mugshots. 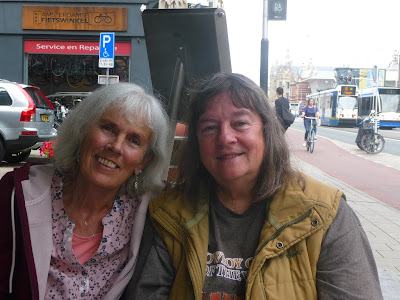 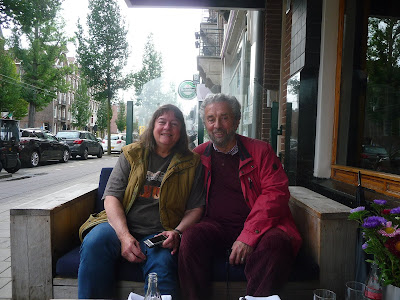 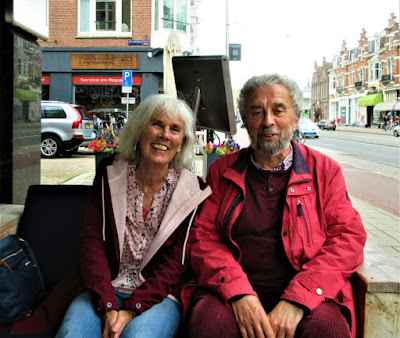 Next time, I'll be writing about the latest works on both the Vereeniging and the Hennie H, which are making slow progress towards being 'vaarklaar' or 'fareworthy' again. It's all hard work, but then at least it's the summer and while we might be slow, we are getting there!

Have a good week allemaal!