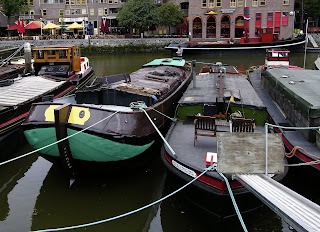 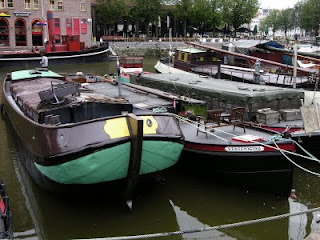 I realise things have been rather quiet here, but there's a reason for that. It all has to do with the Marion Aagje. Mo and Craig's week on the slipway was long, hard work and they put in equally long hours to finish doing all the loud and dirty work that can only be done in the yard. The redundant mast was craned off, the mast foot unbolted, and lots of extraneous bits of steel were ground off by a determined Craig.
As I was still working, I could only help for limited amounts of time, but by the end of the week, most of the necessary welding, grinding, scraping and banging had been done. Then, the dreaded moment when they came off the slips. All seemed fine, until they got back to the mooring next to the Vereeniging. It was then the leak appeared. Water bubbled up and into the hold in rather worrisome quantities. Not sure of exactly where it was coming from, they covered every possible spot with quick drying cement, but the flow still kept flowing. Mo and I spent the best part of an afternoon excavating the now redundant and well solidified cement till we found the real source of the problem, but then, how to stop it? Well cement again did the trick - eventually - but not before I'd requested a return to the helling to pull it out of the water again. Mo managed to exert her will over the leak and pushed enough of the grey powdery stuff into it to finally halt the flow.
After that, well, the rain started, and it rained and it rained and it rained. Last Thursday, the 14th, poor Jodie came to visit for her birthday. It rained relentlessly the entire day, not just lightly, but torrentially, in fact so much that water leaked through my windows and into the bottom of the Vereeniging. Now I had a leak too, but this time from above, not below.
Anyhow, fortunately Friday dawned clear and bright. The sky was blissfully blue - the perfect day for painting. Mo, Craig and I set to it and spent the whole day painting the Marion Aagje from end to end and the results are in the photos above. I gave up around nine at night, but the kids went on and finally finished up at midnight. The barge looks gorgeous now, and I absolutely love the colours they have chosen. There's still loads for them to do, but the bulk of the work - outside at least - is done. What a job and what a week, but then that's life if you have a barge...as they say here 'koop een boot, werk je dood'...I don't think it's all too difficult to work out what that means....
Posted by Vallypee at Monday, July 18, 2011 11 comments:

A helling of a week 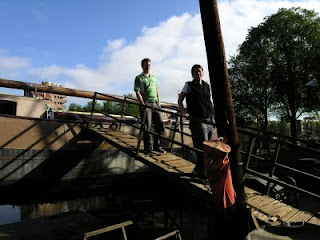 I fully intended to do this post a bit earlier, but what with one thing and another, the week has run away with us and I find it's already Friday with another of those helling weeks nearly over.
This time it was Mo and Craig's turn. Monday morning found us up with the lark helping them to move their barge, the Marion Aagje to the slipway (or helling, as it is known here in the Netherlands). We didn't really do all that much as friend and neighbour, Bas, who was coming off the slips, moored up his own barge and then promptly jumped into the little harbour tug and pulled the Marion Aagje skilfully to the bottom of the ramp. Our contribution in the end was mainly to lend moral support and to act as translators when orders were being barked from the helling crew to Mo and Craig on board.
In the end, it all went very smoothly, and since then, I've lent a hand (when I haven't been at work) with sanding, painting, and the dismantling of various items they wanted off the barge. We've also been official 'Charlie-the-spaniel sitters' when the need has arisen.
They have worked incredibly hard, but this is usual for a 'helling week', as we do it all ourselves in the Oude Haven. By Monday, I expect they will be ready to sleep for a week, or at least their limbs will be. Luckily, they'll be staying over our side for some days while they finish painting and working, so the pressure won't be quite so intense, and hopefully they can relax a little. As long as the weather is relatively kind, they should be able to get plenty done. In the meantime, I'll keep the pictures coming. 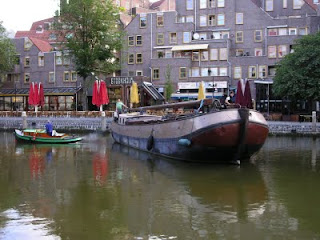 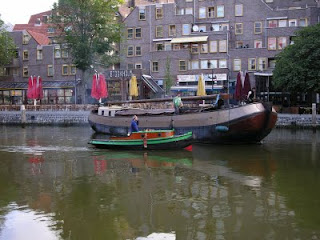 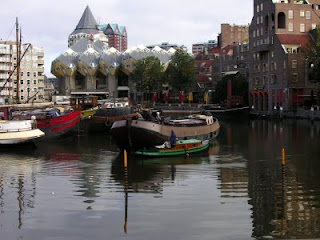 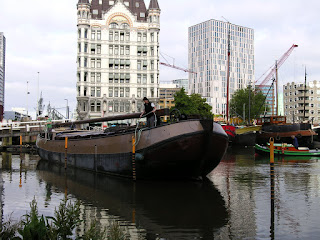 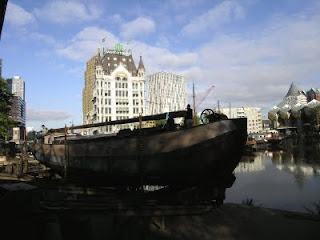 Birthdays in Holland are famous, but not always for the right reasons. Mostly they are the subject of derision among non Dutch imports (like myself), who cannot quite grasp why this ritual needs to be endured every year. I'll admit that's what I used to think too, but yesterday, K Day as I have dubbed it, changed my opinion, and now, I think I could actually get to like these excuses for getting together in a family sort of way.
It was, as most of you already know from that most frenetic of social networks, Koos's birthday.
Why have I changed my mind, then? It helped that the weather was kind. In fact, it was lovely. It also helped that Koos's two sisters are real darlings, and they were the first to arrive with their respective husbands. We did the coffee, tea and apple gebak sitting on the foredeck of the Vereeniging in the sunshine. Koos held court for his family like one born to it - which of course he was.
Then Mo and Craig stepped across from the Marion Aagje which is now moored up next to us (more about that next time), followed by Koos's son, Sanne, and his wife, and not much later by Jodie and Barry. All three dogs, Sindy, Charlie and Beowulf joined the party too, and the conversation took on a noticeably more youthful tone. The tea was exchanged for beer and the apple cake for quiche and salad.
A little later still, Kasper, Koos's other son arrived and then the party was complete. The sun kept shining, the beer kept flowing and all was well with the world. By the time they all left, I realised I'd rather enjoyed the day after all. To see the whole family is always great, and birthdays are really the only occasions everyone manages to make the time to get together. Maybe these cloggies don't have such a bad thing going after all. Dutch birthdays? Just an excuse to get your nearest and dearest in the same place at the same time - something that is becoming increasingly difficult in this hectic world of ours. But well worth it when it happens, mostly anyway :) 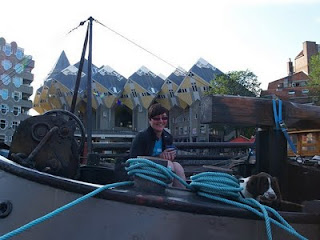 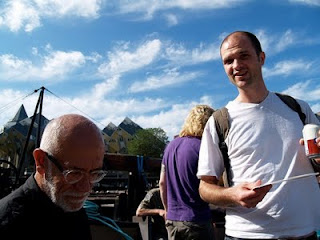 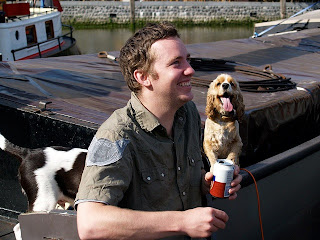 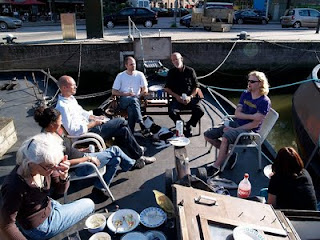 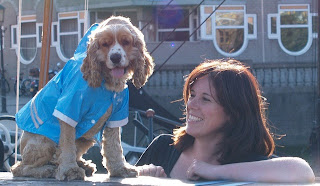