To cross the channel in a barge....

You've seen the start and the conclusion of the story already. Well, this is just a taste of what Charlie and Martin had as their 'main body'. The first photo is one that Koos took as he chased them along the Maas on his scooter. The rest were taken by C & M themselves as they ploughed across a choppy channel. It looks cold and forbidding, albeit bright, but I think they looked really happy all the same. 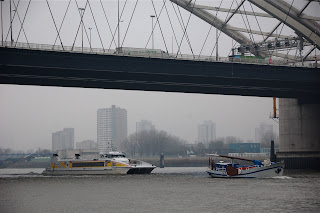 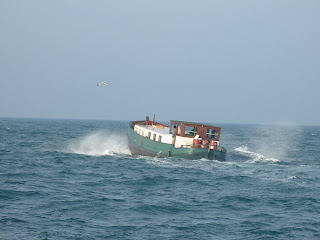 This was apparently a barge called Slobber that they went in convoy with. As Charlie said, the name was very funny when trying to communicate on the VHF! 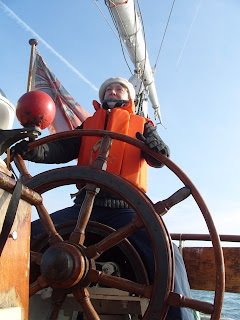 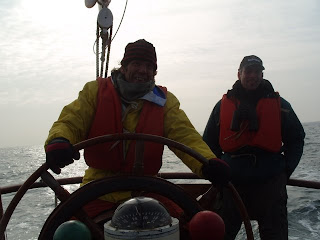 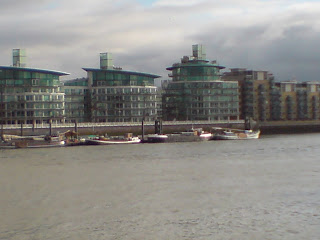 Huge thanks to Melissa of the barge, Hendrik on the Thames in London. She very kindly sent me this camera phone photo of our friends, Charley and Martin at their mooring near London's Tower Bridge - just to prove that they made it! You can just see their Albatros at the far end of the row, probably more recognisable by the shape and the lee boards than by the colours.

Melissa and her partner have their barge on the south side of the Thames and can see the new moorings from where they lie. It's so exciting to see a photo of the Albatros from someone else's angle. I haven't met Melissa, but will be sure to look her up when we next go to London, hopefully to see Charley and Martin celebrate their 'boat warming'.

The picture below is of another of the Albatros's neighbours. If you look at the second barge along on the moorings, I think you'll see it is the same as the Stormvogel as captured below by Koos on one of our visits to London. We subsequently learned that the owners were friends of Charley and Martin. 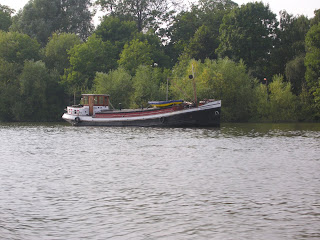 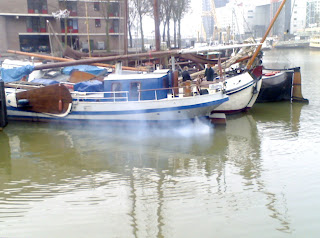 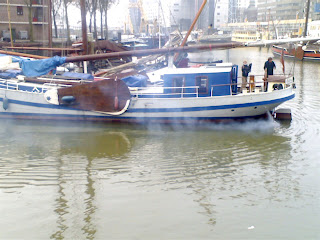 This morning, two of our friends left the harbour on the start of their journey south to Nieuwport in Belgiun. Once there they will wait for fine weather before crossing the channel and making their way up the Thames to their new mooring at Tower Bridge in London. They've been here for about nine months. At first they were just visiting Lise, our Danish artist friend, but then they sold their own barge in London and decided to look for a replacement over here. After months of searching, they bought the lovely clipper Albatross - just as the pound crashed and all the benefit they had from the former exchange rate was lost. Nothing daunted though, they have gone ahead with the purchase, and after a spell on the slips getting it checked over, and a few engine problems that had to be fixed, they are finally on their way. 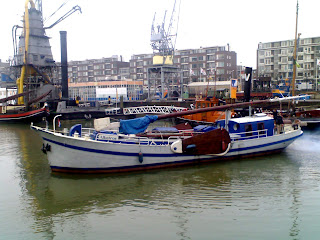 I happened to be walking Sin when I saw them starting out, so I snapped a few photos with my phone camera in between waving goodbye and wishing them a safe journey....a heartfelt sentiment as the weather is horrible at the moment: stormy, wet, cold and generally unfriendly towards poor skippers and their mates who have open steering and nowhere to shelter. Good luck, dear friends and I hope you've made safe haven tonight. 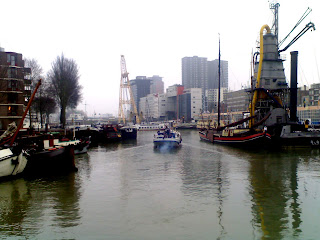 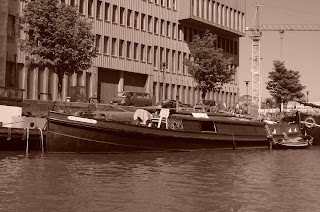 In a matter of a few weeks - about seven in fact - I will be stopping work for a few months. Work as in teaching and anything for which I get paid. It's a little scary to think I won't have an income again until September, but that's one of the reasons I've been working so intensively recently. Hopefully it means I've truly earned myself the time off!

The purpose of the break is to do two things: firstly, I want to do some serious work on my Vereeniging. I'm determined to finish the interior (how many times have I said that these past months?). I started it last summer after having the steel put in the sides, and haven't got any further than putting up the wooden panelling over the new insulation. Then I also want to be able to paint it completely this year, instead of the bits and pieces I managed between the showers at the weekends last year. I have a stint on the slipway booked for the beginning May, and in theory, I should have a brightly shining little barge by the end of the spring. After that, I'm hoping we can do some travelling - by water, air and road. I've promised to visit my friend Marion in Spain for a long weekend (but I might do that earlier rather than later), and then Koos would like to go to Poland again, but this time together. I'd also really love to take the Vereeniging and do at least one trip to Utrecht and the canals for which it was built, and maybe we can drive down to France and find our Philip wherever he happens to be. Then of course, there's the Hennie H that needs some work, and Koos's Luxor too before he decides to sell it.

I'm so looking forward to the break I can hardly wait. There are books waiting to be read, music to be played and writing to be done too. Even so, the little house in Zeeland is also calling for some attention...so much to do! Will I fit it all into five months? I hope so. The way I'm planning things, the days will need to be twenty five hours long and some, and I may just find I'm being a tad too enthusiastic or at least over optimistic! Still, I'll do my best to make it worth it...I will, I will, I will!!
Posted by Vallypee at Sunday, February 08, 2009 10 comments: