Klein in Dutch mean small, but our Klein weekend was anything but. It was great and full and lively and so full of laughs that I shall treasure it in my memory for many a long month.

Klein is of course the surname of our wonderful blogger friend Anne Marie. She and her absolutely dear husband Austin came to visit us for the weekend before leaving for Schipol this evening and Canada tomorrow morning.

We had such a special time with them and talked ourselves into a deep and enduring friendship. Sindy adored them both.

On Saturday, when they arrived, we chatted a while and then went out for a late lunch, then talked more before Austin cooked us the most fabulous meal in the evening.

Yesterday dawned wet and windy, our first rain for weeks, but a shame for them. Still, we took ourselves off on the Fast ferry to Dordrecht and showed them round its delightful historic centre before heading back to Rotterdam. We ended the day in probably the best Italian restaurant in town, and Austin, our gourmet guide was suitably impressed. The atmosphere there is intimate - a real Italian family restaurant. In fact, it's the place my girls took me on my birthday, so it's rapidly becoming a favourite. 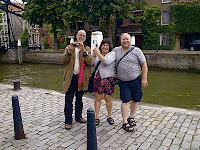 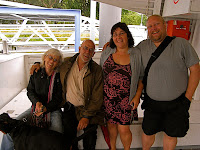 Today, we had a memorable day for two reasons, one of which was the Vereeniging came home to the Oude Haven after spending a year in the neighbouring Haringvliet. Everything went well, the electric starter worked like a dream, and we arrived back in our old home without incident. It's good to be back...

The second reason was that Sindy (s'not fair) bin met Charlie (I'm the cutest) pup for the first time today, and as the pictures below show, no problems ensued. Much to our relief, I must admit. I have to say it was largely thanks to Charlie, who adopts a 'roll over and die' attitude at the drop of a hat. He came back to the Luxor with us and decided the best thing to do was to pretend to die thoroughly. That way he could have a good kip without interference from his big Aunty sin. 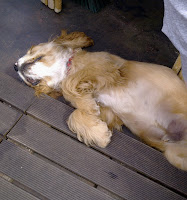 Charlie (i'm a dead dog) pup enjoying a rest on the Luxor. 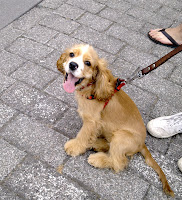 Charlie (i'm the cutest) pup during our walk today. 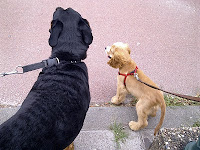 Sin and Charlie a.k.a Little and large or Black and Tan, waiting to cross the road

And these pics below are a couple that Koos took of Sindy today when we were just about to go out. She has this look of desperation that we are rather used to now. It's the "you're not going to leave me are you?" look. Koos has captured her expession so perfectly, I had to post these too. 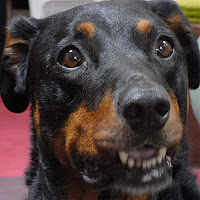 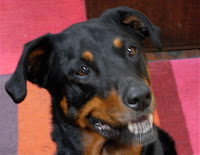 Sometimes there's so much going on I don't know what to write because I can't say it all. It feels like a lull, but in fact it's quite the opposite.

I've posted so much about my leaky bottom of late, I'm sure everyone's sick of the photos of the same old view, so I'm a bit reluctant to put up any more now. The same is true of the Hennie H. However, we have been working very hard on our respective projects, and I'm pleased to say that today I finally got the bed back together and have made a good start on painting. Pictures will come when there's more to show.

I think quite enough has already been said about the World Cup, and I'm very glad it's now over. I'm a bit tired of all the lambasting the Dutch team have had about the way they played, though. I think much of it is unfair and way too harsh. Since I'm neither Dutch nor Spanish and have no vested interest either way, I think I can say that!

I always used to enjoy following Wimbledon, but I don't even know who was playing this year, because of the WC, and I've only just heard that Serena Williams won the women's title. Shame. Not that she won of course, but that I missed it all...

I've also missed following the cricket news...and was thrilled to hear England did so well against the Aussies in the one day series.

The weather. Now there's a good subject! It's been pretty good this summer so far, with near tropical temperatures. I've just left four of my favourite people having a drink on the terraces over the way to let Sin out of an oven-like ship. I was sorry to leave them, but would have been even sorrier to find my pooch shrivelled up with the heat.

The four concerned are marvellous Marion (whose marathon runs I've blogged about before), up for a quick visit from Spain; Miriam, another friend whose work conceiving, building and running a centre for vocational education in Ghana is amazing. I admire her so much. Then there's Jacq, a former much-loved colleague at one of the language centres. She lives here but I don't know why, I never see her except when others come to visit. My fault entirely. Too busy with these boats I suppose. Then finally, there's the incredible Eveline, another colleague, but with a great big difference. Just for starters, she is the only person I've ever met with a degree in rock music, and now she says she's off to France on Friday, but not in your normal way. She's cycling there via the Ardennes. Good luck Evie!! Really special friends, all of them. 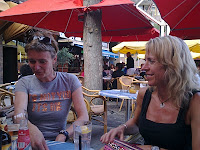 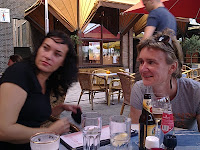 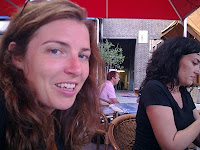 Tomorrow is Jodie's birthday, so the family are descending on me here. Koos is actually extracting himself from Zeeland to join the fun. Another big event is that Mo and Craig have the most gorgeous cocker spaniel puppy called Charlie who we have to try and introduce to Sindy at some stage. Since she's not known for her sweetness and light with other dogs, we'll have to aim for a quick course in desensitization

There are lots of other things going on too, but the main aim in my life at the moment is to have the Vereeniging ready of Anne Marie and Austin's visit at the end of next week. I'm really looking forward to seeing them.

As I've sat here on the back deck typing, the temperature has cooled and I even have goose bumps on my arms. Perhaps this is the moment to stop rambling and go inside. Time for some chores, methinks!
Posted by Vallypee at Tuesday, July 13, 2010 13 comments:

If you play this video clip I filmed just after the first goal, and turn the sound up to triple the volume, you'll have an inkling of the uproar in the harbour tonight. Yes, folks it's the semi final between NL and Uruguay and of course, I support our guys in their endeavours...of course I do...(pinches arm..yes, Val, you do),although I don't need to watch it or hear it quite like this to give my support. Even so, I have to say it don't I? Go Oranje Go!!!!

But before I tell you what that progress is, meet Piet. He is our harbour turtle, and if you look closely, you can see his small round shape on the brick of white polystyrene in the photo here. This is his house, which is hooked up to the bows of my neighbour's ship. After a hard day's swimming and entertaining the tourists, he returns here every afternoon for a rest. Every now and then people threaten to rescue him, and when one day, I told a group of boys that he lived there, they looked at me as if I were batty. We love him, and until the winter, when he will need to be rescued, we hope he'll be able to enjoy his freedom in Turtle heaven. 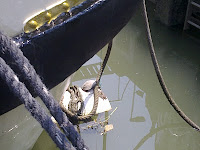 Now for the progress on the Vereeniging. As of this afternoon, the floor and walls in the water tank area have all been replaced, the water tanks themselves are clean, and tomorrow, Jodie and I hope to be able to put them back in their place with a few minor modifications. 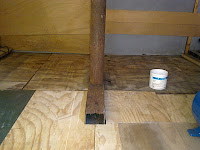 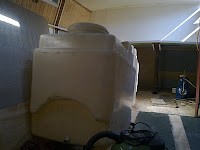 Then I'll be able to tackle the last part of the bottom below the bed. I think that in another week, I should be ready to start painting and restoring the place to normal. Well at least I hope so!..Only three weeks now till Anne Marie and Austin arrive.....yippee! 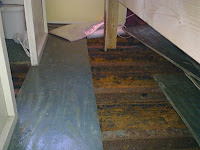