A look back on my 2020 in words and pictures

Oh well, I didn't manage that other post before Christmas, but at least this one is before the new year...just! So before I forget completely, I hope you've all had the best Christmas possible in the circumstances and that 2021 will bring a much brighter year with a real hope of recovery.

On that note, it's been a tough one, hasn't it? I can only imagine the hardship some people are suffering and I am forever grateful I work in education, which has kept going in spite of the universities and schools closing. As a freelancer, things could have turned out badly for me, but I am fortunate I was able to continue with all my teaching online, and in fact was even swamped with work before the summer break.

Then in the autumn, during that brief calm before the recent resurgence of the storm, I had a mix of face-to-face and online courses, which also kept me very busy. But for those in the hospitality and entertainment industries, it's been crippling. No work means no income and these are people with mortgages to pay; some are faced with losing their homes, which is devastating for them. My heart goes out to them all as well as those who have lost loved ones or whose health has been damaged by the virus.

Like everyone, though, we've also missed the travel possibilities. Koos has felt this deprivation particularly as he would normally have been away to Poland and Moldova about three times during the year. However, we've been much less restricted within our own country than many in other parts of Europe. Firstly, we managed a holiday in Portugal in January before Mr Corona swept into Europe creating havoc for us all. But since then, I haven't ever been prevented from going up and down between my cottage in Zeeland and my Vereeniging in Rotterdam, not even when things were at their worst in April.

This relative freedom has been a relief given that we have two boats a hundred and fifty kilometres apart and they both need constant vigilance. The Vereeniging is my work base as well, so it was important for me to be able to commute and some of you might remember I did several posts about going to and fro, up and down, there and back, hither and thither...well, you get the idea. At one point I felt that was all I was doing.

But I think that being long-term boat dwellers means we are used to keeping to ourselves more than most people, so self isolation hasn't been much of a problem for us. I drove up to the city, parked my car, cycled to the boat and to work and often didn't meet another soul. I even took my food with me much of the time. On the other hand, I was also able to keep seeing my daughters, albeit it only outside most of the time. We got together while I had my barge on the slipway, for outdoor birthday picnics and dog walks. When that wasn't possible, I sat in my car outside my younger daughter's house and we chatted on the phone while waving to each other through the window.

So in the greater scheme of things, we've been blessed and are very grateful for it. Neither of us has been unwell at all, and haven't had so much as a cold (cross fingers), so we'll keep downing our vitamins and taking our regulation exercise – not so much fun in these icy winds, but needs must. The worst that's hit us recently is Storm Bella, whose untimely visit was decidedly unwelcome immediately after Christmas, but even then, she walloped poor England much more than us. My sister lives in the Bedford area and sent me photos of all the flooding, none of which we had. It must have been miserable for people whose homes were in the path of the rising rivers. Awful, in fact, after the war of attrition the virus has waged on us.

So, I really haven't got anything to complain about, have I? It's humbling to look back and see how much we have to be thankful for after this strange 'year of the pandemic'. On that note, then, I'll count my blessings, thank my lucky stars and wish all of you a happy New Year's Eve with a wish for better things to come during 2021.

Here are a few photos of the sunnier moments our 2020 year in the order of the months that I took them. 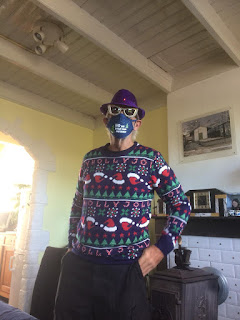 Have a good one allemaal. Here's Koos in his Christmas outfit and facemask on: the face of 2020 past. See you all next year!

Some readers of this blog will already know that Koos, my partner, is the son of a commercial barge skipper and that it was his childhood on the waterways that inspired me to write my novel, The Skipper's Child, a story about a similar barge family. Now, although the influence his barge background had on my book was intentional, what I didn't know when I wrote it was that his father was artistic, a talent he must have passed to his son. After all, Koos's special photographic view on the world, especially that of old industry in eastern Europe has more than a few admirers.
Anyway, going back to father Fernhout, it's not the usual idea one has of a skipper, is it? Well, not mine, anyway. I'd never have envisaged a barge owner sitting on deck with a sketchpad and pencil drawing the views around him, or making studies of birds and people. I don't know why, but it just doesn't fit my general image of the working barge world. As a result, you can imagine it came as a huge surprise to me when at one family birthday party, Koos's sister (who is ten years his senior) produced two sketchbooks full of charming pencil and charcoal drawings all done by their father.
I think even Koos had forgotten about them, but when going through the books, he realised some of the more elementary drawings were probably his own early artistic explorations. Hendricus Fernhout usually signed his drawings with distinctive initials and the date, but these were lacking on some of the pictures, suggesting he was only too ready to encourage his son.
Below are some of my favourites of the drawings and I hope you'll agree they are really lovely. 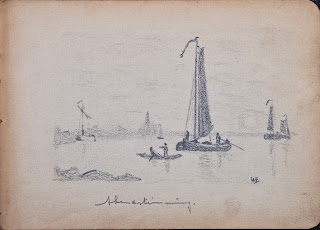 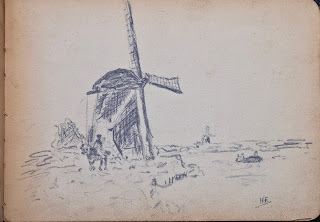 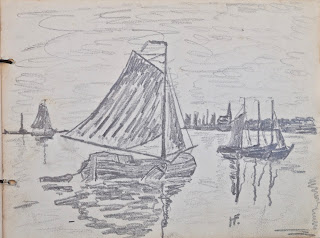 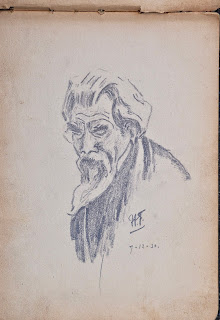 In some ways I wish I'd known about his artistic leanings when I wrote The Skipper's Child. It would have given my 'papa,' Hendrik Kornet, another dimension. But then it's also added to my inspiration for the next novel I want to write: a story that will be built around a young barge skipper during the war. I rather like the idea of a somewhat dreamy, idealistic and arty bargee, don't you? So maybe it's not such a bad thing I was ignorant of this aspect of his personality.

Lastly, I don't really like pushing my books on my blog here, but if anyone does happen to be interested in my novel, there's a link here if you'd like to take a look. It's very much a cat and mouse suspense story, but it's suited to all ages, from ten to...well, let's say plenty!

Have a lovely weekend allemaal and I'll try and do another post before Christmas and fill it with good Christmas cheer.