Lat weekend I didn't get round to writing a post, but I think I can be forgiven as I was in lovely Faro in the south of Portugal. I went with a very good friend of mine, Marion. We have known each other for as long as I have been here in the Netherlands but this is the first time we have been away together.

We had a lot of fun exploring and walking the city and then taking trips out of town. On one day, we headed east to Olhao and Tavira. Olhao wasn't all that exciting (for that read disappointing), but Tavira was gorgeous with a wide river running through it, a castle on the hill and plenty of white-painted charm. I loved it and had to lurk round the river of course.

We had two more days after this on one of which we went to Estoi, a village just inland from Faro, where we found this lovely old palace which has now been converted into a hotel. The rest of the village was rather clearly shut except for one café occupied by a group of English people having lunch. They told us they lived in Estoi and could thankfully tell us how to reach the palace as there didn't seem to be any clues left for Joe Public. Even the bus stops were a learning experience as the bus companies only have a sign on one side of the road. You have to know that you need to stand opposite it on the other side and we were ticked off by the driver for waiting a few metres too far from the spot.


The following day, we took the bus to the beach and walked to a point beyond which there were no tourists or sunbathers at all (always a good goal). We both paddled in the sea, pleased to know we were treading the waters of the Atlantic - I can't even remember the last time I had my toes in such western waters. It was a glorious day; hot with a brisk breeze and much to my shock, my feet and legs caught the sun. I had a rather uncomfortable night coping with sunburn on my shins, toes and ankles. I can hear you saying 'that'll learn you," can't I? 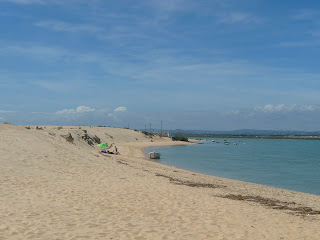 On our last day, we did a boat trip around the islands off the coast. Faro is bounded by an area of natural beauty with a lagoon, mudflats and sandbanks. The boat toured the islands and the skipper, Claudio, pointed out which birds, waders and crabs it was home to. It was great to see all the birdlife, and I must say that Claudio was pretty easy on the eye too, so we didn't mind looking at him either...haha. One island is completely uninhabited with the exception of an old man (in his eighties) and his dog (said by Claudio to be about two hundred years old), the only humans and animals permitted to live there. There was also a lighthouse island where we stopped for a look around. The whole tour was a lovely end to our trip and a very welcome dose of sunshine despite my fried toes.

A state of flux

When I look back on what I wrote in my first harbour memoir, Watery Ways, I realise how much our community has changed since those days. From my perspective, it is less cohesive than it was, but maybe that's because so many of those I started life in the harbour with have gone; such is the nature of a restoration harbour.

Sadly, some have gone with more permanence too. This last week we buried the second of our liggers this year: the first was a mere 52 when his heart just stopped while at work in Kazakhstan of all places; the second was a close neighbour of mine who has been struggling with cancer these past four years. At 74, he'd had his three score years and ten, but it still felt too early. George and I had been neighbours in the line-up of barges many times and even when separated by other boats, ours were never far apart. He'd done a beautiful job of restoration and it is sad that he will never get to go faring in it. I liked him very much. 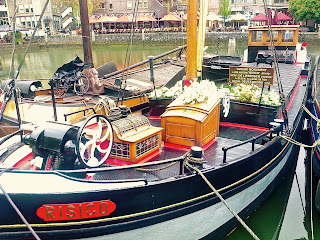 Other things have changed recently too. The helling (slipway) and working yard where I have spent so many hours closed on April the 30th. Its future is uncertain, but the Maritime Museum say they cannot afford to keep funding it as it doesn't make enough money to cover the costs. The keys were handed to the council on May the 1st and we now await negotiations to see if it will be kept going, perhaps on a more commercial basis. I have a lift-out booked for October, so I hope there will be a workable plan.

I think this event, more than any other, defines how things are changing. For the younger generation of liggers, it is probably less dramatic as they have formed their own core community and will arrange things their own way, but for those of us who are older, it feels like the end of an era.

Sorry for the poignant post today, folks. I'm feeling a bit sad, but I hope you all have a great week.
Posted by Vallypee at Monday, May 08, 2017 28 comments: