Don't you love that expression 'a woman of a certain age'? I always used to wonder how old that was exactly. I mean a 'certain age' sounds rather romantic in a way, doesn't it? Try saying it with a French accent and it sounds even better  'C'est une dame d'un certain âge, mais oui'  (is that right? I can never remember the masculine feminine things in French).

Anyway, where was I? Oh yes, wondering what it was exactly to be a certain age.

Well now, I know. I am that thing. In fact it's quite definite now. I am a woman of a certain age.

Still, I expect you want to know how I have come to know this?

Actually, it was all the subtle (or not so subtle) hints to begin with. Things young people would say like "there were a lot of people your age there", and then proceed to tell me about the number of zimmer frames they saw in the entrance hall to the event in question.

Then it was my students saying things like "Oh our stats professor's really old. He must be in his fifties now, you know, like you?"

They never noticed my pained look.

Then finally, the references became more direct. I think it was either one of my daughters or their partners who said recently, "when women like you get to a certain age, they........". I remember the expression freezing on my face. I never even heard the rest of what it was they were going to tell me. It was the dreaded words 'a certain age' that did it. That was when I realised I was there and I had to face the fact.

To young people, being a certain age means  that you are old; to slightly older people, it mean that you are older than them; and to tactful people of your own age, it means you are old like them but they don't want to mention it. Simple, but a tad humbling when you realise that you are, in fact, the last person to have realised it.

Still, it has certain advantages and one of these is having legitimate CRAFT moments. I may have mentioned these before, but being of a certain age, I have now conveniently forgotten this, because in fact I have a lot of CRAFT moments as a result. In case you too have forgotten, or maybe because I have never actually mentioned it at all (not being able to recall these things), a CRAFT moment is an acronym for 'can't remember a flipping thing'.

I have them with increasing frequency (if that's possible and not tautology). CRAFT can happen within the space of seconds. Someone will tell me something in conversation and within moments I am earnestly asking them a question about what they have just told me. When they look at me oddly, I usually remember what I have just forgotten and put it airily down to CRAFT. When they look at me even more oddly, I mutter something about pottery to cover up the moment. Pottery, potty, nuts. You can almost see the word association flitting across their faces, so then I just tell them with as much disarming candour as I can muster:

"Yes, my dear, I am a woman of a certain age and I can't remember an effing..oops, I mean flipping... thing. You'll be there one of these days, and then you'll understand the real meaning of the word CRAFT."

You'd be surprised (or maybe not) at how quickly they change the subject. I mean, it's one thing to label a woman as being of 'a certain age', but it's quite another when they have to accept the CRAFT that goes with it. But I have, and you know something? I don't mind. I am, (how you say), a certain age indeed. 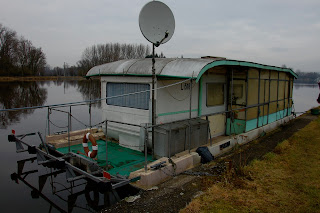 And this photo has nothing to do with anything and I can't remember why I took it, but I like it anyway. I kind of feel it's me in it's chaotic informality, being a crafter and that  :)

Blogging is best but what kind of blog? 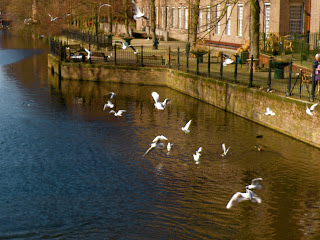 Sometimes I feel I'm a dinosaur here in blogland. It's either that or I see the tumbleweed swirling along its streets. Or maybe the gulls flying over an empty canal is more appropriate. It seems so deserted here much of the time.

I love my blog and have never managed to 'get' the Facebook thing. It's way too frenetic for me and I find myself running my eyes down the 'homepage' wondering what on earth I can possibly contribute. This place - blogland - is my space. I am a little sad that so few people blog on a regular basis these days, well, in my old circle anyway. Many of the bloggers that surrounded the whole Who scene which started me off have given up their blogs in favour of Facebook. I often wish they'd return here - we used to have so much fun.

Still,  I can't help but notice that anyone involved in writing and publishing is very active on the blogging scene. The thing I miss there is the personal element as many of these writer bloggers do it for commercial purposes.

For instance, look at this list of blogs I enjoy. I love Fran's Bonnie of Clyde blog for all those lovely glimpses into her life on a boat in Essex with her allotment, her recipes and the inimitable Pete. I also love Anne Marie's blog as she always has something interesting and gritty to say. Added to that there is Grace with her dogs and animal behaviour issues, Halfie with his English canals and narrowboats, Gina with her wonderful creative way of speaking her mind, Mel with his anecdotes and observations about life in Ireland, String and her fascinating eclectic and spiritual insights....these are my stimulus and my entertainment too. I would be lost without my blog round.

That being said, I realise I have to move in the writing blog direction too if I want to promote my work, so what should I do? Make this Vereeniging blog ever more about writing and reviewing, or should I keep this my personal space about life here in Rotterdam and the Netherlands? If I do that, I'll need a new Writer's blog for everything I want to publish, and this includes reviews, guest posts, short stories etc.

Those of you who still visit me here, I'd be grateful for your thoughts and ideas. I don't want to lose the personal side because that's how I started here, but I know that blogging for my books is going to be essential in the future. What would you do if you were me? I'm kind of inclined to starting a new blog for the serious writing stuff...you know, not mixing business and pleasure and all that, but I'm still not really sure.
Posted by Vallypee at Thursday, April 12, 2012 14 comments:

Today, I have indulged myself by making this book of a children's story I wrote last year. I've had Jodie's lovely illustrations for a while, but was waiting for a few more before publishing it. However, other people's babies don't wait and Jo is very busy so I decided to make the book with what I had. I love it, and hope she does too. I'm also hoping the babies for whom the story is destined will grow up to like it as well. My image is always of Mum or Dad with little one on a lap being read to and having the pictures shown to them as they go. It's what I used to do when Jo and Mo were small as well.

The Horse that Smiled by Valerie Poore | Make Your Own Book

Even the title makes you want to quote it doesn't it?

I have just finished reading this wonderfully human and entertaining book. It's a sort of Internet age Bridget Jones Diary for the more mature woman. Well, maybe not exactly, but it is a kind of diary. In fact, it's written as a blog and includes all the comments made by the blog followers. As the book progresses, the number of comments increases, and we get to know some of these characters too through both their sympathy and (sometimes) impatience with the day to day problems faced by the heroine of the piece.

I must say I became pretty fond of Amanda Wilson (blog name: Facing50withHumour), a rather refreshingly normal middle-aged woman who admits to her worries about turning 50 and all the attendant struggles with wrinkles and other folds (or should I say rolls) that being 'of a certain age' implies. I also became fond of her taciturn husband and irresponsible son, especially when his world collapses on being dumped by his first real love.

Amanda is a social networking addict, not really having all that much else to do apparently. Her husband has taken early retirement by selling his business and spends most of his time poring over stock prices on the Internet. Her son still lives at home, much to her husband's disgust and gives them both headaches with his attitude towards life, money and his parents. Even so, Amanda doesn't have a job, and apart from keeping the house, looking out for son Tom, and trying her best to find hobbies to drag Phil, her husband, out of his morose world of falling stocks and shares, her time is spent blogging, playing Facebook games and looking for ways to fight the flab, wrinkles and other signs of age that beset her as she approaches 50. If there is anything that bothered me at all about the book, it is that in some respects, life seems a bit pointless for all of them.

Of course, there is more to it than this, and Amanda faces a number of dilemmas, one of which is how to deal with the increasingly flirtatious attentions of an old flame who she plays Facebook Scrabble with. Another problem is her feisty mother, who at seventy something, seems hell bent on going out, partying and getting drunk - in Cyprus! I won't say more as I wouldn't want to spoil the book for anyone planning to buy it and read it. All I will say is that it's a fun read, charmingly honest and with plenty for the slightly more mature among us to relate to. Some parts even had me laughing out loud. It also has some good plot twists and in its format as an ongoing blog, it's very much a book of this age. In a word, I can honestly recommend it for relaxing weekend or holiday reading. It's available here.