A port in a storm

Normally that means somewhere peaceful and quiet doesn't it? Well, this is my twist on the phrase. This is our 'port'(Koningspoort) in a storm of football fever.

I don't own a TV, but even if I did, I wouldn't need one. From the back deck I can hear every gasp, groan and roar of excitement as the Netherlands team plays good and bad shots, misses the ball, brings on a new player...you name it, every moment is recorded in tumultuous sound.

The pics below are my view this evening as I sit on the Luxor and enjoy the evening air on our own terras. Eat your heart out Koosje! I must say I am enjoying the Luxor's privacy this year. I'm just sorry Koos isn't here to enjoy it too. Still, I haven't been without company and have had two very pleasant evenings with friends and neighbours who have come to enjoy the luxury of our watery amenities. Now all I need is for the World Cup to be over....after all, now SA is out......oh alright.... I will support Holland now...... Go, Oranje, go!!!! 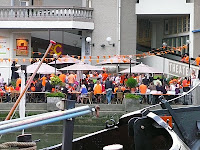 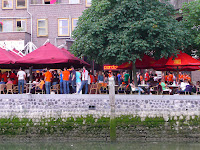 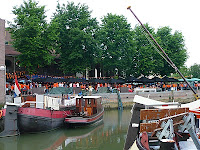 Two important happenings to report in the smaller scheme of things, being my life: the first is the progress on my bottom....Yes, I know I've worn that joke a bit thin now, but the thing is it really is the bottom of my ship I'm talking about and not the floor, which is not the bottom. See?

Well, to put that behind me (there I go again), I have made a lot of progress, although not as much as I would have liked, I must confess. I was really hoping to have the floor completely back in by now and the water tanks fixed. Unfortunately, the whole length of the bottom of the hull has been affected by the leaky tank, so it's meant scraping, cleaning and oiling much more than I had anticipated. What it amounts to then is that with the help of Mo, Jodie and Koos at various times, I've done more than I thought I'd ever have to do but there's still more to be done....ok, enough of that now. The bottom line (:-))is that there's still a way to go before I can start painting and re-installing fittings and furnishings. Oh by the way, this was the low part as you might have guessed by now.

The high of the week was on Sunday night when I went to see Crowded House for the second time. They were playing at a large venue in Amsterdam, and thanks to the kindness of a friend of mine who organised the tickets (thanks Suze!!), we were in the front row. Mo came too and we had the great pleasure of watching Neil Finn and co at their very best. What a fantastic concert it was. Their interaction with the audience was so spontaneous and entertaining, it made for a huge amount of feelgood atmosphere. They even had a couple of kids from the audience up on stage with them, racing Mark Hart from one side of the stage to the other, and playing instruments with them too.

The funniest thing was that one of the little boys could actually play the piano and totally de-railed everything when he started playing Bohemian Rhapsody. Queen at a Crowded House concert? They took it as they should - with wry good humour and plenty of fun. All in all, really great stuff with lots of laughs,not to mention all those gorgeous Finn songs and a great performance by all concerned. That was a real high. 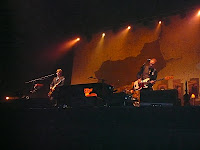 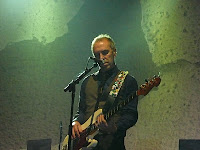 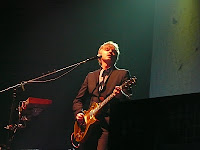 Just to say I have now deleted my last post, as it was written for those who knew Gypsy and Neil but are not members of Facebook. I think it is now time to let our friend do her grieving in private. Thank you all for your kind comments. I know for sure that Gypsy really values the friendship and support shown by everyone who knew them both. It has meant the world to her.
Posted by Vallypee at Monday, June 21, 2010 6 comments:

Well, not quite, but certainly across the water.

To put you in these pictures, so to speak, Koos and I were walking in a very rural part of Belgium on Saturday afternoon when we came across this tiny ferry. We didn't realise what it was at first, but as it started floating out into the waterway, we noticed the ropes that were attaching it to each side of the canal. Fascinated we decided to climb in and cross to the other side...

It was easy. All you had to do was pull on these

Weeheee, and over we went.....ferry, cross the water, cos this land's the place I love...lalalala..

Once out on the other side, we left it to float free till the next chance walker came along...pretty, no, lovely country, isn't it?

And then, on with our walk amongst the daisies and the new green growth.

I have to say we haven't been so charmed in ages. It was just so sweet, and someone obviously cares for it. It's clean, dry and very very blue. I love it that it's just there for any chance walker to come across. Belgium is the home of the surreal, and this is just another part of it, don't you think?
Posted by Vallypee at Monday, June 14, 2010 8 comments: 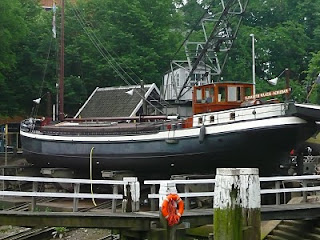 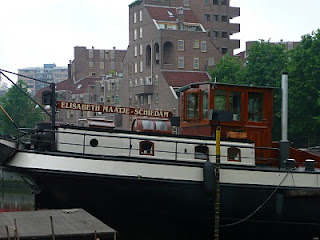 The roef where I lived. This was the only habitable part of the Hoop when I stayed on board 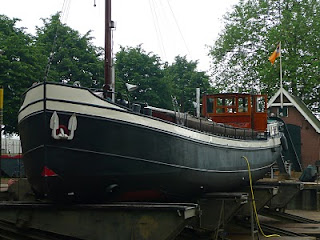 This is the Hoop. Well, that's not what it's called anymore but it is the Hoop, my Hoop, the beautiful Luxe Motor I so happily lived on for a year and a half between January 2001 and August 2002. To my mind, it is still the most elegant and lovely motor barge I have seen and known and when I look at it, I am filled with warm, nostalgic memories.

I dare not go inside now. The lovely roef where I lived, which was all so original, has been ripped out and replaced by a new version, re-modelled as a kitchen (so I believe). I can hardly bear to think of it. Apparently it has been very well done, but even so, it seems wrong to me to take out all the lovely old panelled cupboards and fittings, even it it has been replaced in the same style.

I know I'm being sentimental, but it is also about the history of the barge, not just my feelings. Nevertheless, seeing it on the slipway here is still good, and I know the people who bought it from Philip care for it very well. They haven't committed the sacrilege I have with the Vereeniging in replacing the old engine with a newer version, for the Hoop still has its original Kromhout. It sounds wonderful too.

The photos above show it as it is today with its new name, but to me it will always be my Hoop, the Hoop that gave me such hope.
Posted by Vallypee at Thursday, June 10, 2010 17 comments: