A sojourn in Seville

As some of you may know from my postings elsewhere, Koos and I went to Spain on January the 10th and have only been back a few days. We had a really lovely time, the weather was beautiful (although not hot at all), and we were met with more kindness and friendliness than I could have imagined.
We flew to Seville and made the city our base for the full week we were there. The first and last days were spent travelling - always a complete day, however we do it - so we had eight days to explore Seville and its environs.
The only downside to the whole trip was the room we'd booked. We wanted to be quite central and not too far from the bus and trains, so to keep costs to a reasonable level, we opted to stay in a cheap hotel/hostel in one of the narrow backstreets of the old town. While it was a fantastic location, our room was at the back of the building with no window onto the street. In fact, the only window it had was onto one of those typically Spanish shafts that provide an opening for houses that back onto each other. Being high and narrow, virtually no light gets in and our room was simply dark the whole time. I couldn't wait to get out into the light every day.
In addition, the city sewage system in that area has clearly seen better days, so the smell of dirty drains pervaded everything. Other than that, though, we were in a very good position and were able to walk to the heart of Seville within ten minutes or so, which was great! 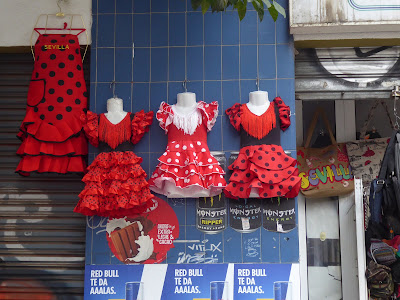 Most readers here probably know that Seville is deep in Andalucia and flamenco is everywhere. Even the little corner shop in our street had these delightful little dresses for small girls. Interestingly, this shop, like hundreds of others we found in Seville, was run by Chinese people, all of whom speak Spanish, but with the standard confusion between L and R, which made me smile. It reminded me of so many of my students who have the same problem. 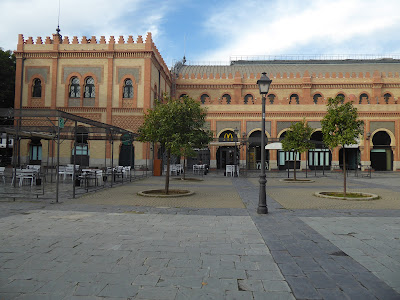 The rather grand Moorish building in the photo above used to be the city's railway station but is now a kind of enclosed market with small kiosk-type shops inside. (We won't mention the McDonald's, which seems to be everywhere). This kind of building design seems to have been quite common for train stations as we saw others with similar arches and decorative detail. 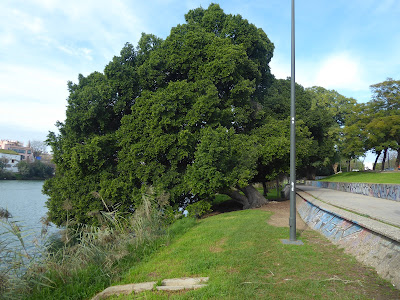 Of course, the first place Koos and I always go is to the waterside (eerst naar de waterkant, as they say in Dutch), and we were much impressed by this amazing old tree leaning over the banks of the Guadalquivir. On the subject of the river, the stretch that runs through the city is actually still water. Its main tidal course was re-routed to the west of the city in the 20th century to prevent flooding, and continues on to Cordoba and beyond. Apparently, however, navigation is only possible up to Seville, and only when the tide is coming in. The port of Seville is in the reach of the river that runs through the city, and is behind a large lock. From what I've read, though, flooding can still be an issue as in both 2006 and 2010, the city suffered from severe floods, and it was even worse in 1963.

For those interested, there's an interesting article about Seville and the Guadalquivir here. 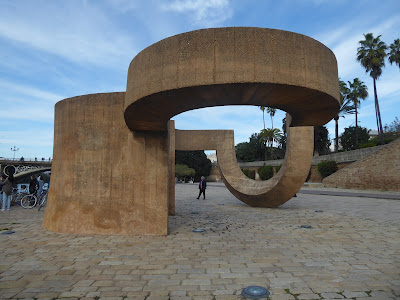 We had a lovely walk along the riverside, which is very popular with the locals. I liked the sculpture above; it was created for some very philanthropic purposes that I'm afraid I've forgotten now. I completely failed to make a note of the plaque that told us who the sculptor was and what it was for. Maybe one of the readers here knows what it commemorates?

My apologies for the slightly skew photos below. I normally straighten my snaps as it drives me nuts if things aren't level or properly vertical, but my usual laptop has crashed and I don't know how to use the photo editor on this machine yet. Anyway, these were some of the sights from the river I captured when we went on a passenger cruise on our second day there. 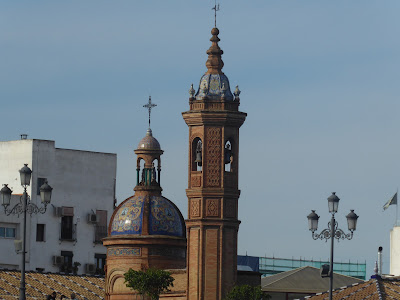 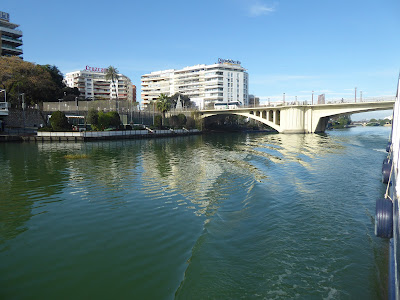 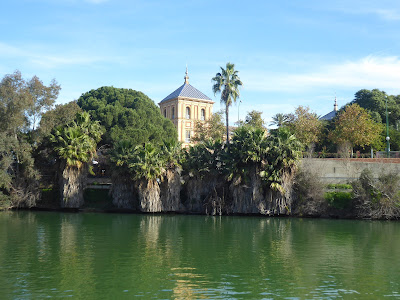 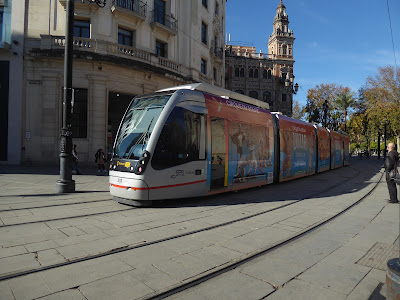 One thing that surprised me was the extent of the very good public transport system. We tried it all. The tram is just one line, but it's modern, electric and very good. The buses were excellent, and there was even a metro, which we travelled from one end to the other, right out into the furthest suburbs. I'll tell you about some of our trips the next time. 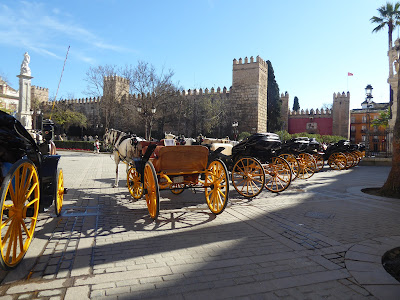 Like many cities focused on tourism, there was the possibility to do a tour of the sights from the comfort of an open carriage. I couldn't help feeling sorry for the horses, however. They seem to spend hours just standing there with no water or food and, in the summer, no shade either. I hope I'm wrong and that they’re relieved or at least given water at regular intervals. They’re very lovely, though, so I had to take some photos of them.

The photos below are of Seville cathedral. It is apparently the third largest church in the world and the biggest gothic church in Europe. We managed to visit it on our last day and were really impressed by its immense size. I also liked the mix of styles. It was an add-on (if you like) to an Arabic mosque and I loved the simplicity of those early parts of the building. The opulence of the ornate nave and sanctuary were less to my taste, partly because of the extreme demonstration of affluence they represented, but also because it was bordering on overkill. I took dozens of photos but it's hard to decide what's worth including. 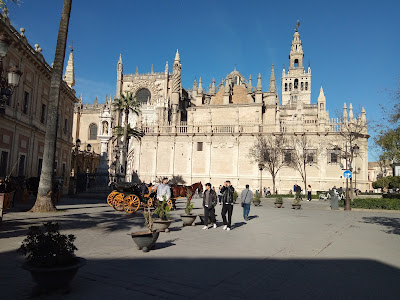 It isn't possible to talk about Seville without mentioning the oranges. They’re a real feature of the city streets, and if you are wondering what happens to them, they’re collected and cleared now and then by the city council. Apart from the fact they're far too bitter to eat, it isn't permitted to pick them as they belong to the local authorities. From what I've read, they're used for a number of purposes, including medicinal and culinary. I remember my mother buying Seville oranges to make marmalade when I was a child, but we never ate them raw. It was lovely to see them on virtually every tree in the city streets, though. 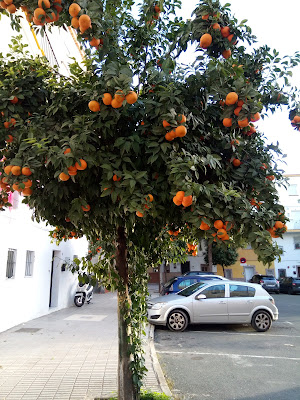 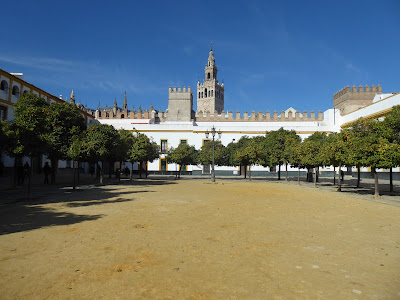 And the last thing to mention about Seville itself in this week's post is the music. We saw and heard music everywhere from day one, even being serenaded while we had our meal the first evening. Koos was also given the chance to play by one kindly busker, which made his day.

The man in the photo below was playing flamenco guitar with great skill in a passage. 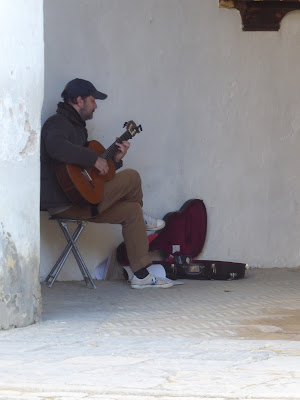 These three were busking next to the tram stop and were doing an excellent job of covering great rock songs. The guitarist, in particular, did a very professional and convincing performance of Brian May's guitar solo on Bohemian Rhapsody. I have to say it was a very pleasant way to wait for the tram. 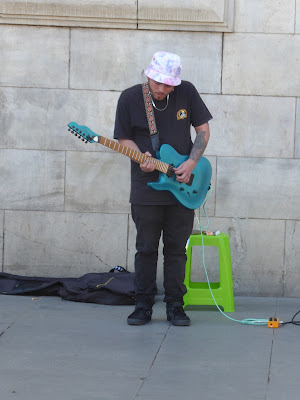 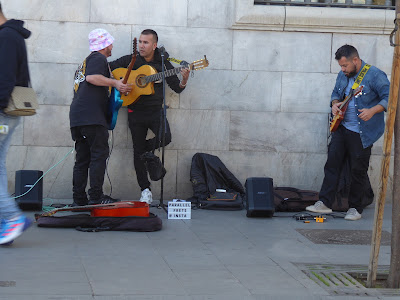 We also saw some wonderful impromptu flamenco dancing at the Plaza de Espana (more on that amazing place next time). I find flamenco very inspiring and soul stirring, and loved seeing this young group performing in public. 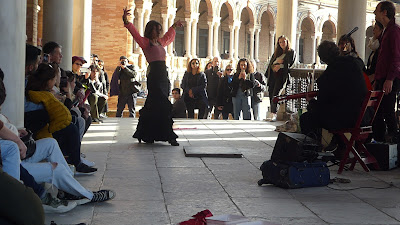 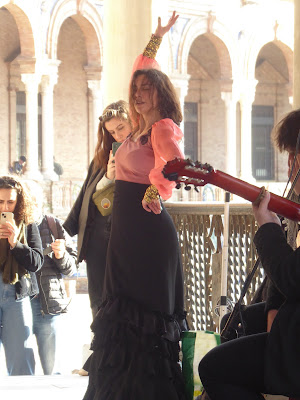 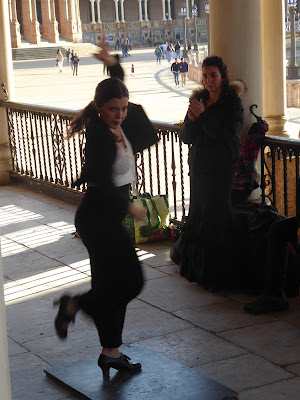 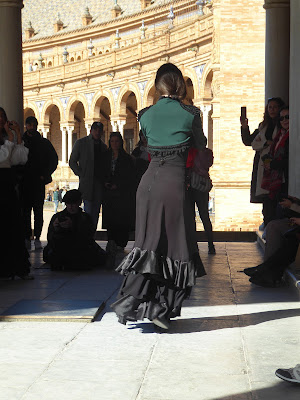 Well, I think that's enough for this time. I'll write more about some of the other places we went and the people we met in my next blog, but for now, I hope you've enjoyed this snippet of our experiences in Seville, allemaal.

Have a good week and all the best from a very cold and frosty Netherlands. That Spanish sunshine is already becoming a distant memory.

If you aren’t a Google member, you can comment anonymously, but please would you give your name. I like to reply to a person personally :)