So it finally happened.

After the months of planning, the weeks of preparation and the days of waiting for the right weather window, we have done it. But what an emotional move it was.

I'd been watching the weather forecast closely to find a day when the wind would drop and it would be dry. Always unpredictable, the weather in the Netherlands is never something we can completely rely on but the prospects for last weekend remained looking good. Added to that, Koos had almost completed his rest period following his pacemaker op, so we made the decision to leave on Friday morning.

The previous weekend, with the help of my daughter and her boyfriend, I'd made everything ready for an easy departure: the gangplank was on board, the ropes arranged for quick removal and my little green boat donated to a friend and neighbour. By Thursday evening, all we had to do was leave with the low tide the following morning, at 10:30.

Well, the morning had other ideas. We awoke to thick mist, which was even thicker over the river. We couldn't even see across to the other side.

"Never mind. It'll lift by the time we want to leave, I'm sure," I said with optimism.

Koos agreed. "I only need to be able to see the opposite bank," he said.

I wasn't sure about that, but kept my counsel. I wanted to at least be able to see a couple of hundred metres with ease. Anyway, we got ourselves ready, double-checked the oil, topped up the coolant and greased the stern gland for the umpteenth time (I'm a bit OCD about that). Finally, we disconnected the electricity. We were ready.

I trudged round to where we'd parked the car, a bit dubious about the mist that was still refusing to disperse, and collected our rain suits. As I was stepping back on board, I noticed some balloons strung across the harbour. Curious, I stopped and peered into the mist. There was a sign hanging from between them, but I could only see one word on it: my name.

My throat and eyes filled. Oh my. Was this for us? I'd told our neighbours we were going but never expected them to make any kind of event of it. I imagined we'd just slip quietly out with a wave or two. I was hugely touched by this gesture.

But there was more to come.

Koos and I decided we'd head out towards the river exit at the end of the Haringvliet harbour and see whether we could cross. We untied the last ropes and reversed out into the harbour. As we did so, I saw our neighbours standing at the back of their barges, waving to us.

We turned and headed towards the string of balloons, and that was when I saw what the sign said: "Vaarwell, Valerie," a touching acknowledgment of my combination life and language here in the harbour and in the Netherlands. In Dutch, there would only be one 'l' on vaarwel.

And then the horns started. I get a lump in my throat just writing this; it was so moving and so beautiful. Several of the barges used their horns to send us on our way, a sound both mournful and joyous—if that makes sense. I was openly in tears by now and hard put not to tell Koos to stop. It was all a mistake; we shouldn't go.

I don't think I've ever been given such a wonderful gift as this acknowledgment of our place in the harbour and I'll never forget it. Here's the video our harbour master made of our departure. I'm sure you'll agree it would tug at anyone's heartstrings.

There was still more to come, though. When we reached the bridge that would take us out onto the river, the fog was still very thick. Koos thought we could go on, but to my huge relief he made a VHF call to the river traffic controller who, on hearing we had no radar, advised us quite firmly against proceeding. Actually, what he said was, "That doesn't sound like a good idea," (in other words, don't do it!). And so we tied up to the quay wall and waited.
Meanwhile, another friend who has a mooring further along the harbour called Koos. He said he'd heard we were leaving and wanted to say goodbye. Would we wait? Well, of course we would, and we did.
Fifteen minutes later a figure appeared on the quay opposite; it was our friend. He pulled something out of a bag, and then we heard it. Another deeply moving farewell played especially for us, but even the apartment dwellers and passing boat traffic appreciated this unique performance. Koos made a video of that too.
I still can't quite get over how special they all made us feel and I hope this blog is a testament to how grateful we are to have been part of such a wonderful community for so long.
Still, we had a mission to accomplish and the first was to cross the river without bashing into any barges emerging unexpectedly from the fog. Eventually, the murk lifted enough for us to proceed. It was 11.45 a.m., more than an hour later than we'd expected to be able to leave, but (with my heart beating a wild tattoo) we were finally across and on our way.
Now, I would like to say the tide was with us all the way to Dordrecht, but despite what the tide tables indicated, that wasn't the case at all. We seemed to be going against the current the whole day. At first, it didn't make too much difference, and the 25 horses in our old Samofa managed it perfectly. Koos steered while I obsessed (as usual) over the stern gland and the cooling water.
Mind you, it was Koos who noticed the coolant was running low and some frantic topping up was needed. After being drained and refilled a couple of times, some air had got into the system which, after being allowed to escape, meant it had fallen to dangerously low levels. Luckily, no harm was done and we didn't need to fill it up again.
Over the course of the next few kilometres, my stomach knots unwound and my heart resumed an almost normal beat. We were treated to the company of the stunning historic sailing barge, Helena, for a short time as well, which made my hour if not my day. The weather brightened slowly and by the time we gave the Samofa a short rest from fighting the current on the Noord just before Dordrecht, the sun was out and warming us up nicely. (Incidentally, we were down to about 4 km/h on the Noord.) 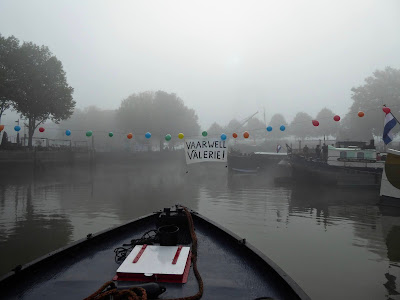 It was about 4.30 p.m. when we set off again for the next nail-biter: traversing the mighty Merwede at Dordrecht, and (apparently) the busiest shipping junction in the Netherlands, and maybe even in Europe. We needed to cross it and head south along the Dortse Kil to the Hollands Diep; the Merwede continues west to become the Oude Maas. So a little way beyond the entrance to the city's own historic harbour, Koos increased the Samofa's revs to warp-factor speed (okay, about 9 km/h instead of its normal 6), I crossed my fingers once more and we powered over to the Dortse Kil in the wake of a massive sea-going ship that was heading westwards. 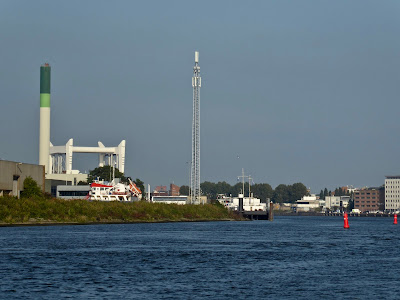 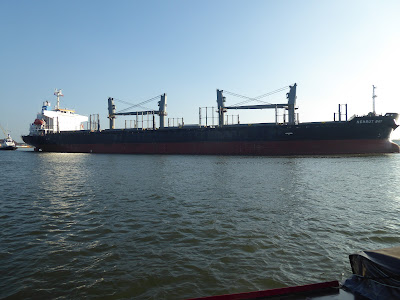 Heart failure averted, we ploughed our way south towards my real nemesis: the Hollands Diep (or Hollandsch Diep for the purists).
It was 5.15 when we reached the estuary. I should mention here that back in 2004, when the Vereeniging still had its single-cylinder hot-bulb engine, we broke down on this waterway. On an earlier occasion, a storm on the Hollands Diep came close to driving us onto the rocks near Willemstad. I am not a Hollands Diep fan. As a result, when Koos suggested we take advantage of the remaining daylight and cross over to moor up at Moerdijk on the other side, I gulped down my fear, crossed my fingers yet again and nodded.
In the end, it only took us ten minutes to make the crossing and the only incident was a misunderstanding with a very large barge whose skipper didn't realise we were heading for Moerdijk's Insteek Haven. Clearly thinking we were deliberately being obstructive, he blasted his horn at us, so Koos slowed down immediately. As the barge passed us at speed, a crewman shook his fists and shouted insults at us. In response, Koos got straight onto the VHF and apologised to the skipper for the confusion, instantly defusing the situation. He's good at that.
As we entered the Insteek Haven, I prised my fingers apart and rubbed the blood back into my knuckles. We'd made it!! Our first day of travelling was over and we could relax in an unbelievably peaceful harbour. The sun was dimming rapidly as we moored up to the jetty below the lock leading to the Rode Vaart. Technically, we weren't supposed to be there. The voice at the end of the VHF had told us to seek permission from the lock keeper, but there was no one in the lock's office to ask.
We settled down, had coffee and went for a short walk as the sun disappeared over the horizon. What a day! So full of emotion, tension and exhilaration, but throughout it all, despite the strong currents, the Samofa never missed a beat. I was more pleased than I can ever say. What a trooper of an engine!
And so allemaal, this is where I'll finish this blog post. I'll do another post with the rest of the trip very soon, but I think this is enough for now. I hope you've enjoyed travelling with us so far, and I'll leave you with a photo of our lovely first night's view. Isn't it magic? 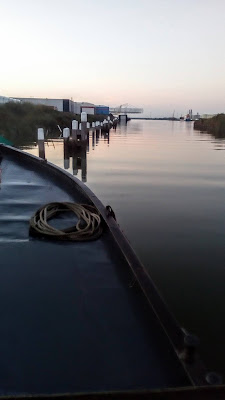