The Oudenbosch Basilica: St Peter's in the Netherlands

My second post of the year! It's is also a bit later than I intended, but hopefully I'll get back into the swing of things soon. In any event, the month hasn't had a very auspicious beginning. Apart from the leaks, which are not yet totally cured (a long story for later lamenting), it's been (yes, you've guessed already) largely wet, and cold and only fit for hibernating. Or maybe I'm not being totally fair.
On Sunday, one of Koos's sons came with his wife to visit us at the Vereeniging. As always, we enjoyed their company tremendously and did a walk around Oudenbosch to show them the new sights (or sites). For once the afternoon was sunny – for a while anyway.
Our first stop was the famous Basilica, which I think impressed us all. I'd been before, but this time, the pale sunlight was shining through the high windows and it all looked rather heavenly (sorry). For those who didn't read my previous post about this amazing church, it is heavily inspired by both St Peter's in Rome and the basilica of St John Lateran (which is also in Rome but outside the Vatican).
The story goes that Oudenbosch's parish priest in the mid-19th century was one Pastor Willem Hellemons, who had studied in Rome. He'd spent his free time in the holy city walking through St Peter's and developed a great admiration for the church's architecture. His lodgings, however, were opposite the St John Lateran basilica, so when he returned to the Netherlands, his dream was to build a church that would honour both buildings as well as the Pope himself.
Enter the famous architect Pierre Cuypers (he of Amsterdam central station and the Rijksmuseum fame) and the Basilica was designed with the nave, dome and interior based on St Peter's while the facade was copied from St John Lateran's. Apparently, permission for this smaller St Peter's (in fact dedicated to Agatha of Sicily and Barbara of Nicomedia), was given by Pope Pius the 9th after the Dutch Papal Zouaves and other local Catholics went to Rome to defend the pope against Garibaldi's nationalist army in 1868. I'm not quite sure how this was possible, though, since construction had already started in 1865, so maybe it was more of a blessing than permission.
In any event, the connection with Rome was confirmed, and Willem Hellemons' dream was realised. There is even a piece of the cloak worn by Pope John Paul II during the assassination attempt on his life in 1981 held as a relic in the Basilica. What is remarkable is its size. It is a massive church for such a small town and stands out as a somewhat incongruous but proud landmark.
So there you have it: a bit of quirky Dutch history that is visible for literally miles around. I particularly like the saintly statues on the top of the facade. They look quite a crowd scene, don't they?
The photos of the interior below are, I admit, not the best. I took them with my phone, which has a fairly dreadful camera, especially when it comes to lower light levels. I hope they give you an idea of the rich decorations in the church.

After leaving the Basilica, the weather changed and it became cloudy, windy and rather cold. Undaunted, and with our hands shoved in our pockets and our noses tucked into our scarves, we all walked across the main road to see if we could find the Chapel of Saint Louis, the Basilica's smaller scale mirror image and an even quirkier feature of Oudenbosch history.
Koos's photo below is of the chapel, which is set in a courtyard surrounded by what used to be a famous boys' school.
As you might already have guessed, our Pastor Willem Hellemons was the brain behind the school project and the mini basilica; the architects were different though. The setting is lovely, but unfortunately for us they are restoring the chapel, so it was closed and we couldn't see inside – a shame because I believe that too is beautifully decorated. The old school buildings are now rather elegant apartments.
If you'd like to read more about it, this website is in English. Oddly, it's all written in the present tense, but that's a Dutch convention and is often how the past is presented. Here too is a link to a book (in Dutch) about the school; it gives a few photos of the chapel's interior, which I found interesting; I hope you do too.
Lastly, I've pinched another picture from the Chapel's website, which shows clearly how similar it is to the Basilica. 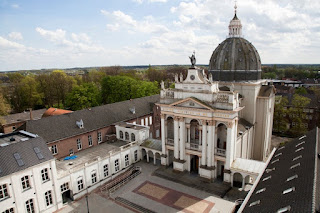 In other news we are at last having a few dry days this week, and this morning the sunrise was quite beautiful. We've also managed a few good walks, so my last few photos here are of strolls with my grandpup-next-door. I am blessed, aren't I? What with the Vereeniging in Oudenbosch and the crumbly cottage in Zeeland, life could be a lot worse despite our current restrictions and wintry conditions. 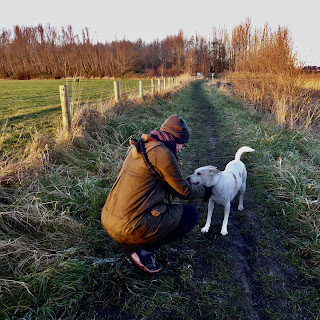 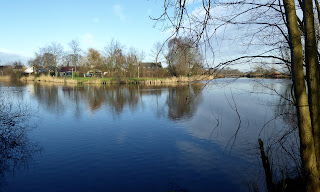 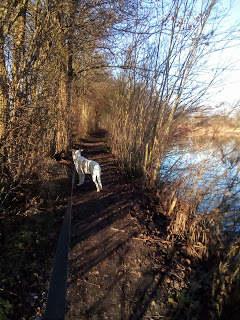