This week's blog is a reflection of our yoyo life at the moment. As I mentioned last time, we are moving the Vereeniging to a new mooring sometime in the next few weeks. The actual departure date depends on a number of things: weather – we don't do foul weather faring; tide – we want to leave at the beginning of the flood tide, which involves the next thing; time – the exact hour we're able to depart is important in order to reach halfway at least before dark. The last and most vital determiner is health – Koos has just had his pacemaker fitted and isn't supposed to exert himself too much for a few weeks; he needs to follow doctor's orders (some hope of that!) and if that means a delay, then so be it. My contract begins on the 1st of October, but we will wait until all these factors align before we make the move, either before or after that date.
Our destination is a town called Oudensbosch, and the arrows on this map are roughly the route we'll be taking: 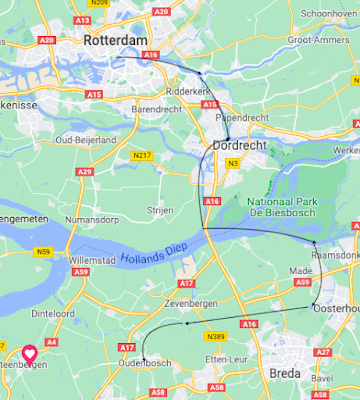 Oudenbosch is situated on a branch off the river Mark, and because of its location, we cannot reach it without some deviation. The route we've decided to take towards the east first is, I admit, a bit circuitous, but it take us through slightly narrower channels than if we were to go west. Not being a fan of the wide waters (in other words, I'm a wimp), this way was my choice.
After twenty years in Rotterdam, the move is a major one for us and I am (as you might imagine) both excited and nervous. It's been a very long time since my Vereeniging did such a long two-day journey, but we hope she'll be happy in her new home next to a grassy dike and without tides and moving neighbours to contend with – which brings me back to our yoyo life.
I've been busy trying to get her ready to make a good first impression, so during our weekly treks up to Rotterdam, I've managed to paint her decks, the cabin and engine room roofs and the rubbing rail, not to mention what we call the potdeksel the name of which I haven't been able to discover in English, but it's the rim that runs along the top of the hull all round the barge. 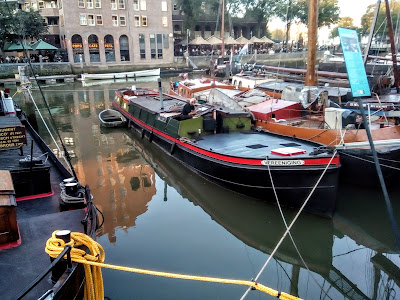 She's looking quite smart now, so let's hope we don't have a lot of dirty rain to mess it all up before we leave! I've also bought a new tarpaulin, which I'll probably put on next week. It's quite a job as holes have to be cut in it for the roof light and the chimney, as well as cutting the piece above the entrance hatch.
There's still so much to prepare for, my mind's in a total tizz and full of thoughts of how much fuel we'll need, what documents we should have, the safety equipment we need and all the peripheral (but still necessary) extras, e.g. food, light, and drinking water. I don't have a bank of batteries or solar panels to provide our own energy, meaning everything has to be camping style for this trip – including the loo.
Back in Hennie H land at the other end of the yoyo, we've had some excitement of a different kind. A few weeks back, there was a report in the regional news that a steel-rotting bacteria had been identified in Zelzate marina just over the border in Belgium and a mere 4.5 kilometres from where we keep the HH. Apparently, the bacteria is so corrosive that it acts 75% faster than normal corrosion and several boats in the marina were seriously affected. We were naturally concerned (for that, read horrified!) but in our harbour, neighbours who had recently been out of the water reported no problems with their hulls. So we held thumbs and all our other digits crossed and waited for updates.
Even so, it wasn't long before the press came round to gauge our reactions to the news, and Koos and I were interviewed for the local newspaper. The headline the next day was a quote from Koos saying how  immensely relieved there'd been no place for us in Zelzate. In fact, we'd hoped to get a mooring there a few years back – a close call indeed.
The photo below was one the photographer took to go with the article. I think it's rather a nice one, despite the gloomy subject. Anyway, we've just heard that the researchers investigating the bacteria have established they can't find it anywhere else on the canal, so we can all relax and uncross our stiff fingers! 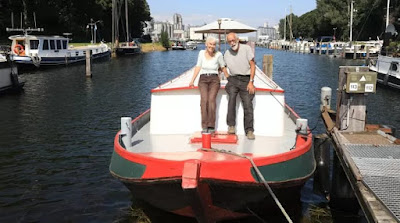 I have, of course, been painting on the HH too, while Koos has continued his finishing touches on the engine, but what I'm most pleased about is the progress I've made on cupboard number two; another fire extinguishing hole that has been wholly re-purposed (see post re the first cupboard) :) 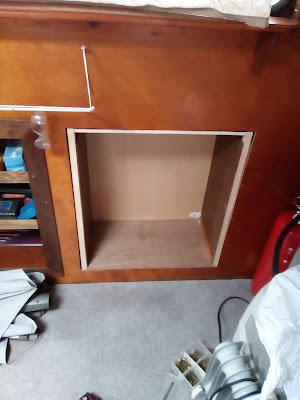 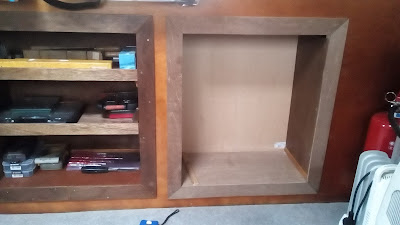 I still have to make doors for it, and a shelf or two, but it's coming on well, I think. The first one is already in use....housing still more tools! One day, I hope it will hold books and other nice things, but for the moment, drills, screws and other bits are the order of the day.
And just to finish off, and for no reason at all other than it made me smile, here is a photo of a garden shed I saw on my walk the other day. Isn't it sweet? It looks as if it's got a scruffy haircut and I can't help thinking it's been left on purpose given the neat trimming on the lower parts of the shed. 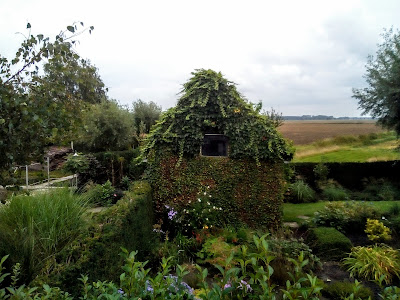 Have a good week allemaal and I'll try and keep you updated on our move as and when it happens.
Posted by Vallypee at Monday, September 13, 2021