Sitting on the bank of the canal

This week hasn't generated much in the way of new news. It's been situation ongoing here in the flatlands; in other words, preparing for the Vereeniging's big move from Rotterdam and painting the Hennie H.
I know there are only so many photos of the two barges in their usual spots I can show you without being tedious. It would be a bit like trying to post photos of my cat sleeping in the same position every week, wouldn't it? Not that I share my life with a feline friend–not yet, anyway, but you know what I mean. Suffice to say, both barges look marginally better each week, which is more than can be said for the cat...if I had one.
I had a brief eruption this weekend when a neighbour who shall remain nameless decided to use an angle grinder right next to my newly painted deck and deposited swarf (a new word for me) all over it, but that's about the only blip in an otherwise flatlining week. I will admit that my language became quite colourful when I discovered the damage (the result of the blip), a rare descent into extreme vernacular for me, but I think I got my message across. I told said neighbour I would forgive him, but it would take me a week or so.
And for anyone who's wondering, Koos is doing well following his op. His first checkup confirmed his control panel (pacemaker) was working fine.
Anyway, given the dearth of fresh news, I thought I'd share these photos with you. I was sitting on the bank of the Gent-Terneuzen Canal last week watching the water traffic while waiting for the bridge. It was open to allow the tug boat in the photo below to pass through as well as the big tanker beneath. 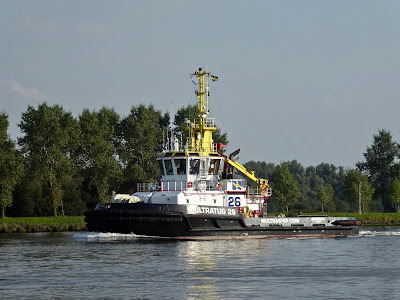 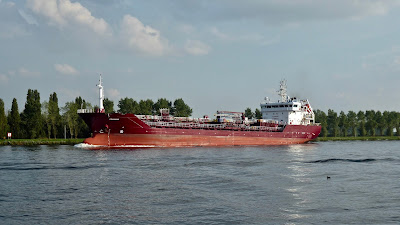 A man stopped to chat to me and seemed surprised that I loved watching the 'big boys' going by. I explained we had a boat in the harbour and that this was my world. He nodded and smiled; I think he understood. We carried on chatting for a while and he told me that on the 24th of December, the biggest freighter in the world would be passing Terneuzen on the Westerschelde on its way to Antwerp for repairs. It's 400 metres long, 70 metres wide and 17 metres deep. Just think about that for a moment. He suggested I might like to see it...would I ever? The date is noted in my diary with brighter colours than Christmas.

Meanwhile, on a slightly smaller scale, the photos below are a random collection of shipping moments I've captured at various times. Four of them are on the Gent-Terneuzen Canal, but the others are elsewhere, and perhaps they give you a glimpse into and an idea of what I love to see.

I would never be permanently content with waterways that only cater for pleasure craft. This commercial traffic has the vibrancy of real life and I revel in it. Maybe you can see why.

Have a lovely week allemaal and I hope I'll have more to say about our progress next time.
Posted by Vallypee at Monday, September 20, 2021