I've been a bit quiet here and didn't manage to post a blog last week. There've been various reasons for that, one of which is that I've been trying to finish writing the novel I started four years ago. I've taken up a challenge I've done before, which is to write 50k words during November. There's an official name for this challenge (NaNoWriMo), which you can also do officially. I'm not, but I am unofficially sharing the experience with a small group of Facebook friends, one of whom is my author friend Alyson Sheldrake, who is just so inspiring. She's published four books this year alone and she's way ahead of the rest of us in this endeavour already, but I don't think I'd have reached today's total of 30k words without her standard bearing. Thank you so much, Alyson! Since I was already over 40k when I dragged it out of my files and blew the proverbial dust off it, I'm well on the way to a completed novel. Whether it will be worth reading or not is another matter entirely, but we'll see. I can but hope!
Anyway, apart from that, we've been spending quite a bit of time on the Vereeniging, and on Tuesday, we went exploring again. In truth, we'd planned to take the old girl for a quick spuddle up to the end of the arm to be able to turn her around and work on the starboard side, but it was real brass-monkey weather, so we went out in the car instead.
Our venture took us along some pretty back lanes to the small town of Zevenbergen, which happens to be the local authority centre for the council district of Moerdijk. I wasn't expecting much at all but was very pleasantly surprised by what we found. I have to confess that my photos don't really do it justice and the town is prettier than it looks, but what fascinated us was the canal running up the centre of the main shopping street.
Until last year, it wasn't there. Well, that's not strictly true. Many years ago, it was a through connection from the Hollands Diep to the Dintel-Mark river, which is the commercial waterway that runs east and west from Oudenbosch. The connection was, and still is, the Roode Vaart, except that at some point, the section that crossed through Zevenbergen was filled in, closing off access to the Mark as well as the northern section to Moerdijk.
When we left Rotterdam, we stayed overnight below the lock into the Rode Vaart after crossing the Hollands Diep, and we talked then about how much time it would save us to be able to carry on through Zevenbergen if we could get to Oudenbosch that way.
Here's the map that shows you what a short cut it would have been: 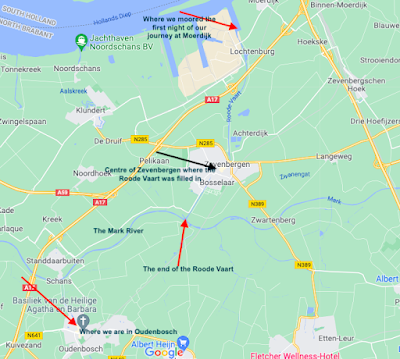 And here's the route we had to take, although it's not completely accurate because it doesn't show the Moerdijk mooring which is just beneath the word 'Diep' of Hollands Diep: 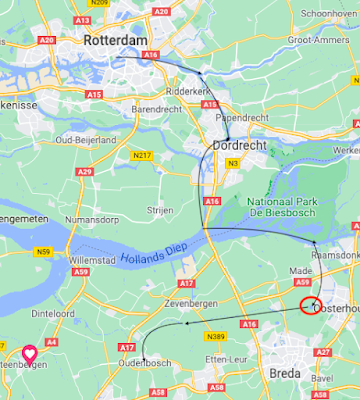 Anyway, imagine our surprise when we arrived in Zevenbergen and found they have dug out the canal through the town to make it look more as it did in former times. Apparently, it's only been open for about a year. Sadly, though, the crucial parts at each end are still blocked off, but a very friendly local told us it might be opened up in the future, "although that might take a year or ten," he said with a smile. Still, we live in hope!

Below are the snaps I took with my phone. Bearing in mind the steely grey of a very cold November day, you can see they're trying to make it a real waterside town with fake masts as lampposts and bridges across at regular intervals. I was charmed by it all and felt we'd made quite a discovery. 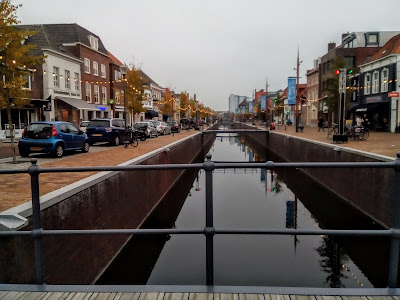 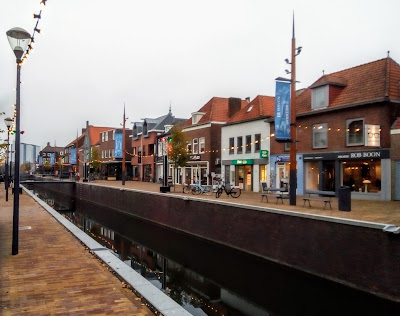 Above is the marina at the end of the northern section. They will have to dig under a large main road to break through into the town section. And above is what you see looking in from the marina. At the far end, there would be a longer stretch to be dug out, and since this would involve demolishing some relatively new buildings, I can imagine that might take some time.
As my title says, this really was some unexpected bounty, and I'm pretty sure we'll be back again for a visit on a sunnier warmer day next year.
Enjoy your weekend, allemaal and I'll try and post more news again next week. Wish me luck with my word count!
Posted by Vallypee at Friday, November 19, 2021