The tale of two weeks

Oh dear. It's nearly two weeks since I last wrote my blog and once again the time has flown by. One of the difficulties I face now is that there's been so much going on I hardly know where to begin. I think I'll have to start keeping a diary soon. That'll be a first. Mind you, I'll probably forget to write that as well, knowing me.

Limburg is a long, narrow province, sandwiched between equally undulating parts of Germany and Belgium and Drielandenpunt is the end tip of this sliver of the Netherlands. Added to this, Limburg is the province through which the Meuse / Maas river runs on its way to its mouth in Rotterdam. It is also where Germany's Roer river merges with the Maas. Then there is the river Geul that threads its way through Valkenburg, which lies in its valley. So, a large river valley with at least two confluences, and high hills to the east and south are just the beginning. Add to that days of torrential rainfall in the region and you have all the ingredients for a flood disaster. I was in Valkenburg again at the end of May (see blog) with my daughter and we had glorious weather then, but with all the hills running down into town, I could easily see how it might be at risk.

As things stand now, the waters have receded and the rains have stopped, but the destruction has been too terrible. Luckily, there has been no loss of life in the Netherlands; that is not true of Germany and Belgium, both of which have serious death tolls and even worse damage. It's heartbreaking and tragic, and my thoughts remain with all those who have lost everything they own in the deluge.

Over on our side of the country, we were spared all but a couple of weeks of miserable weather; however, nothing out of the ordinary unless you consider that it's supposed to be summer, although this last week has been lovely. I was half expecting the high waters to reach Rotterdam at some point, but it seems to have been dispersed through the country's impressive water management systems before it reached us. We feel almost unfairly lucky.

In other news, we are still working on the Hennie H and the Vereeniging in the hopes of getting away at some point this summer. An inspection by an expert yesterday revealed we still have some jobs to do for the HH's new engine to be deemed properly installed for insurance and warranty purposes. We shall prevail, though. As things stand, travel is difficult at the moment anyway. We can't go to France without fulfilling all sorts of conditions and maybe Belgium will follow suit. Who knows? The Netherlands is officially Code Red, so we may have to settle for pottering around locally. On the upside, the Vereeniging's engine ran well in its first test this year, as did the new boiler (have I mentioned that before?). I can hardly believe it's not leaking and that the fitting went so smoothly!

There is more to say and more to tell, but I think it will have to wait until next time. The witching hour is approaching and I am ready to hit the hay. Enjoy your weekend, allemaal, and I'll catch up with the news very soon. In the meantime, here's a photo or two for you all. 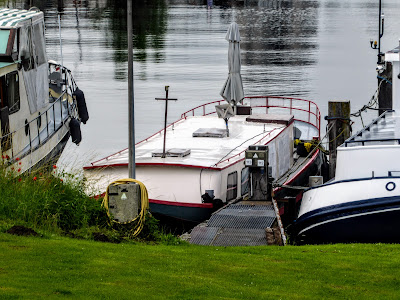 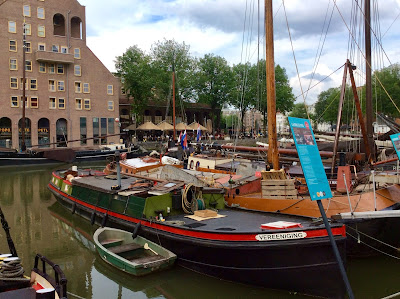 I might have posted this already, but who can spot
the new window I've installed?